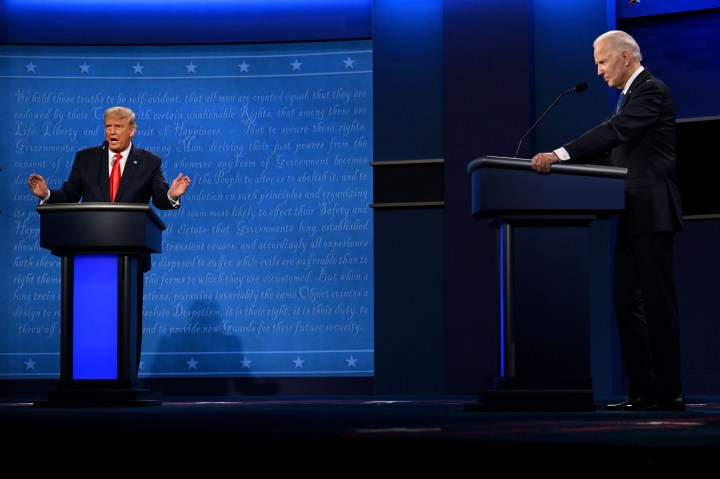 During the final 2020 presidential debate, President Donald Trump and Democratic nominee Joe Biden faced off over a range of policy issues, including the economy, immigration and taxes.

The two sparred over Trump’s handling of the COVID-19 pandemic, a crisis that has led to a massive economic upheaval in the country — including record unemployment.

Here’s a closer look at some of the specific economic issues the two debated over, and how accurate their claims were:

Trump said that the U.S. added back a record 11.4 million jobs after the layoffs that began during the COVID-19 crisis.

It’s true that the economy ended adding back about half of the 22 million jobs lost because of the COVID-19 pandemic. The economy has rebounded quickly because businesses have called temporarily laid-off Americans back to work once they were able to reopen.

But some of these job gains are not full-time positions. In August, the U.S. added nearly 1.4 million jobs, with 238,000 of those new jobs representing temporary census workers.

And job growth is slowing as temporary layoffs become permanent. While 4.7 million jobs were added in June, the number of new jobs has been decreasing since then.

Trump also mentioned that “we had the best Black unemployment numbers in the history of our country.”

The Black unemployment has dropped to record lows over the past couple of years, at some points dipping to between 5% and 6%. But when you compare it to the white unemployment rate, there are always disparities between the two.

The effect of raising the minimum wage on businesses

During the debate, moderator Kristen Welker asked the two presidential candidates whether they think it’s the right time to ask small businesses to raise the minimum wage.

The federal minimum wage currently stands at $7.25 an hour and hasn’t budged in more than a decade, although some individual states have set their own higher wages. Activist groups and Democrats are pushing for it to be $15, which Biden affirmed Thursday night.

Trump, however, said that a higher minimum wage isn’t helping small businesses and that it would lead them to lay off employees.

But research has shown that minimum wage hikes don’t lower employment levels. A paper from the National Bureau of Economic Research examined 138 state-level minimum wage changes between 1979 and 2016 and found that the “overall number of low-wage jobs remained essentially unchanged over five years following the increase.”

The Center for New York City Affairs also looked at how minimum wage increases affected restaurant employment in NYC. The New York state minimum wage rose from $7.25 an hour at the end of 2013, up to $15 in 2018. During this same time period, employment grew 20.3% at full- and limited-service restaurants.

“This report does not suggest that New York City’s sharp minimum wage increase caused restaurant employment to soar,” the report said. “But the research presented here clearly shows that the large wage floor rise did not diminish various indicators of restaurant performance, including job growth.”

At one point during the debate, Trump said that China is “paying billions and billions of dollars” to the U.S. and that this money is going toward the $28 billion bailout his administration gave to farmers affected by the U.S.-China trade war.

Trump has claimed, falsely, throughout his presidency that China is paying for tariffs. Right now, the U.S. has 25% tariffs in place on around $250 billion in Chinese-made goods.

A report from the Federal Reserve Bank of New York last year found that the brunt of the cost of Chinese imports is indeed falling on the U.S.

“U.S. businesses and consumers are shielded from the higher tariffs to the extent that Chinese firms lower the dollar prices they charge. U.S. import price data, however, indicate that prices on goods from China have so far not fallen,” the report said. “As a result, U.S. wholesalers, retailers, manufacturers, and consumers are left paying the tax.”

Who benefits from the stock market?

But Ruchir Sharma, a contributing opinion writer with The New York Times, wrote that his research indicates the market has no clear bias in favor of either party, which goes against Trump’s suggestion that the market favors him.

The richest 1% of Americans now own more than 50% the value of equities owned by U.S. households, according to Goldman Sachs.

The state of Social Security

Trump has recently deferred the collection of payroll taxes (for those earning less than $100,000 a year), which began on Sept. 1 and will last until the end of the year. This means that he’s paused taxes on the employee portion of Social Security, which is 6.2% per paycheck.

“When you take this pandemic recession [and] you combine that with a payroll tax cut, well, the date of the Social Security fiscal crisis could be moved up earlier,” said Chris Farrell, a Marketplace senior economics contributor. “Reducing payroll taxes at this time is only going to undermine Social Security finances, and too many older Americans rely on their Social Security benefits to pay the bills.”

The Social Security Administration’s chief actuary did say if payroll taxes were eliminated, with no alternative source of revenue, benefits would indeed be wiped out by 2023. But while Trump said he wanted to terminate the payroll tax (and pay into Social Security through a general fund), his proposal would need approval from Congress and he doesn’t have much support from either party.