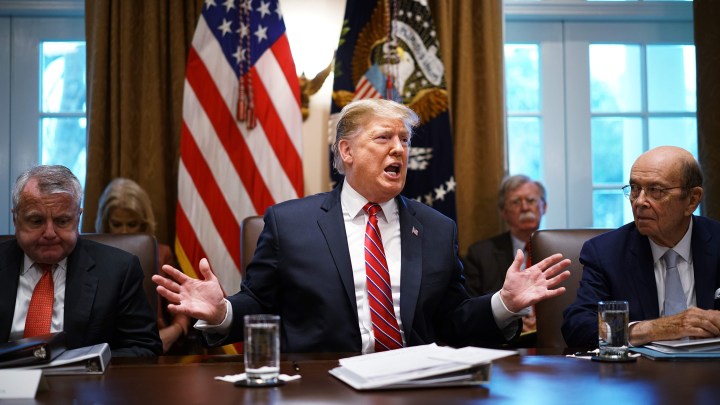 President Donald Trump has threatened to impose additional tariffs on $300 billion worth of Chinese imports to the United States if on-again-off-again trade talks fail to deliver a deal. He said 10% tariffs would kick in on Sept. 1 on a wide range of consumer goods, from baby clothes and lawn furniture to iPads, TVs and toilet seats.

The president said this about who will pay the cost, according to a transcript published by the White House:

“China eats it because they have to pay it. Because what they do is they devalue their currency and they push money out. Our people haven’t paid, as you know. We’re also charging them 25% on $250 billion. So we’re taking in many billions of dollars. There’s been absolutely no inflation. And frankly, it hasn’t cost our consumer anything; it costs China.”

“That’s false,” said Peter Morici, professor emeritus of economics at the University of Maryland and a former director of the Office of Economics at the U.S. International Trade Commission.

“China pays a very, very small part of the bill,” said Edward Alden, a senior fellow at the Council on Foreign Relations.

“Several studies have shown that tariffs raised in the early years of the Trump administration are being passed on fully to the American consumer,” said Reed College economics professor Kimberly Clausing, author of the recent book “Open: The Progressive Case for Free Trade, Immigration, and Global Capital.”

So far, government reports have not shown a sharp upward spike in consumer price inflation. Clausing suggests one reason: The costs of tariffs on imported goods from China, such as washing machines and auto parts, have been spread across the economy and diluted. Prices for services, meanwhile, haven’t been affected.

“The typical American is spending over 80 cents of their dollar on things that are domestic — like health care and tuition,” Clausing said. But the new tariffs Trump has threatened on goods such as apparel, toys and electronics are more likely to hit consumers’ pocketbooks.

While it is accurate that China does not pay the price of tariffs — they are taxes collected from U.S. importers as goods from China come into the country — that doesn’t mean there is no cost to China from tariffs, Morici said.

“The Chinese producers themselves bear a burden in that production is moving offshore, and the Chinese economy sees it in falling investment,” he said.

“Aid to American farmers to offset their market losses so far has surpassed the revenue from the additional tariffs,” he said, citing recent research. “So this has been a net loss even for the U.S. Treasury.”