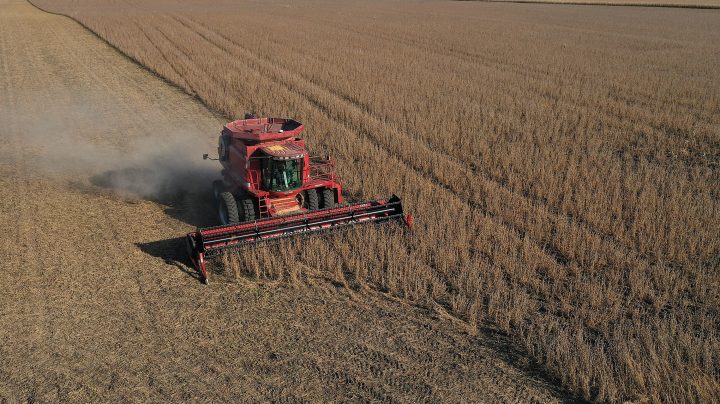 COPY
A view of a combine being used to harvest soybeans in a field at a farm in Iowa. Joe Raedle/Getty Images
Trade showdown

A view of a combine being used to harvest soybeans in a field at a farm in Iowa. Joe Raedle/Getty Images
Listen Now

The U.S. has given billions of dollars in aid to farmers negatively affected by the U.S.-China trade war, but some regions and farmers are benefiting more than others.

After the U.S. began applying tariffs on billions worth of Chinese goods back in 2018, China began slapping their own penalties on American products where it hurts: think cotton, soybeans and pork.

Just before the trade war, back in 2017, states had exported billions in these products to China, with Illinois alone exporting nearly $2 billion in overall agricultural goods and Iowa exporting about $1.66 billion, according to data from The Trade Partnership.

Enter the Market Facilitation Program, which is administered by the Farm Service Agency (a branch of the U.S. Department of Agriculture) and has given direct payments to producers who have been hit with retaliatory tariffs. But the program has generated controversy from politicians over which areas and which farms are getting subsidies  — and why they’re getting the amount they’re getting.

Illinois has received the highest amount in subsidies under the MFP to the tune of about $1.77 billion, according to data obtained by Marketplace under the Freedom of Information Act for the period of Sept. 7, 2018 to Nov. 1, 2019.

Check out the map below to find out how much each state received in subsidies:

*Amounts are based on the address of the state where farm subsidy checks went, even if the farm owner does not live in that state.

Meanwhile, soybeans were the commodity that received the highest subsidy amount in 2018, which totaled $5.1 billion.

Many of the states receiving the highest subsidy amounts voted for Donald Trump during the 2016 presidential election and are key to his re-election chances in 2020.

“You gotta remember why the trade aid is there: they’re political payments to farmers to keep them in the Republican fold,” said Bruce Babcock, a professor of public policy at the University of California, Riverside. “Trump hurt farm income through his trade tariffs. And so what they’re trying to do is keep a big force — rural Americans and farmers — voting Republican.”

About 40% of farm income ($33 billion in total) for 2019 came from “trade assistance, disaster assistance, the farm bill and insurance indemnities,” according to a report from the American Farm Bureau Federation.

Meanwhile, there are some states with a very large agricultural sector, like California, with a high number of exports to China that aren’t getting as much in farm subsidies as these Midwestern states.

Chad Hart, an associate professor of economics at Iowa State University, said federal farm payments have historically targeted specific crops, which include wheat, corn, cotton, rice, sorghum, barley and oats, and have later grown to include soybeans and dry beans.

“It just so happens that the major production regions for these crops are the Midwest and the South, areas you could argue that are more dependent for agriculture for economic activity than other parts of the country,” Hart said in an emailed statement.

The MFP has also changed since its inception last year, with some politicians arguing that it actually unfairly benefits Southern states, despite the large amounts given to Midwestern states like Illinois, Iowa and Minnesota.

In a report released last month, Democratic senators argued that five southern states (Georgia, Mississippi, Alabama, Tennessee and Arkansas) have received the highest average payments per acre under the program.

Anne Schechinger, a senior economic analyst with the Environmental Working Group, said payments under the MFP in 2018 were based on what crop a farmer grew, but in 2019, they have been based on the number of acres of different crops grown in each county.

“The way that they do the formula this year, you know, they tried to kind of come back from paying so much for soybeans,” Schechinger said. “But still, these Midwest states are really big ag states and have a lot of acreage, so they’re still going to be the highest payments.”

The report from Democratic senators also highlighted another controversial aspect of the program: how much the aid package has benefited wealthy producers over smaller farms.

“The issue with that cap is that it is per person and not per farm. So you see a lot of these farm businesses or foreign partnerships that can have an unlimited number of people essentially taking payments,” Schechinger said.

Schechinger noted that another “loophole” in the program is that you don’t need to actually be farming or work on a farm to get payments. You could be someone, for example, who was originally from a family farm, but moved away years ago.

“These payments are really going to the largest farms that have the most acres, and not really to these smaller farms that are actually struggling with the trade war and need the assistance the most,” Schechinger added.

Some farmers are questioning whether their hard work is worth it.

Jan Abbas, a corn and soybean farmer in Iowa, told Marketplace that as she’s in her combine and hears news about the markets on the radio, she thinks, “I’m doing all this work, as this corn goes in, and we’re only getting this much.”