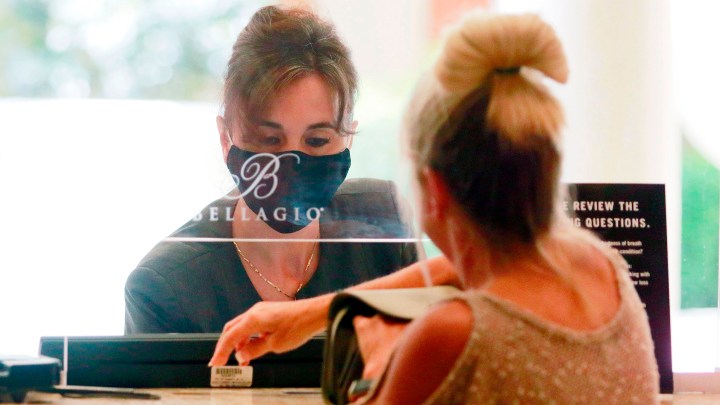 COPY
A front desk worker assists a patron with checking in at the reopening of Bellagio hotel-casino on June 4, 2020, in Las Vegas. MGM Grand Resorts has announced it will lay off 18,000 workers who were previously temporarily furloughed. Ronda Churchill/AFP via Getty Images
COVID & Unemployment

A front desk worker assists a patron with checking in at the reopening of Bellagio hotel-casino on June 4, 2020, in Las Vegas. MGM Grand Resorts has announced it will lay off 18,000 workers who were previously temporarily furloughed. Ronda Churchill/AFP via Getty Images
Listen Now

It’s the first of the month, and people who got temporarily furloughed because of the pandemic collapse are being told not to come back … ever. For example, 18,000 MGM Grand Resorts employees got that word. There’s a psychological cost to this, morale, and the question of workers getting the skills they need for the next gig, if there’s one to be found.

Steven Davis, professor of economics at the University of Chicago Booth School of Business, spoke with “Marketplace Morning Report” host David Brancaccio about this. The following is an edited transcript of their conversation.

Steven Davis: It’s not just literally reskilling. It’s, people get discouraged when they can’t find a job for a few months. Anything we can do to hasten the economy’s recovery and accelerate the creation of these new job opportunities will help on both the morale front and the skill-building front. Because businesses themselves will have an incentive to help train the employees that they they want to bring on.

David Brancaccio: But I note, in one of your recent papers, you’re not a fan of government policies that encourage companies to keep people on board if there’s a sense they ultimately won’t need them.

Davis: That’s delaying the inevitable at a very high cost. And I think a perfect example of this is our policy toward the airline industries. The Treasury Department decided to spend tens of billions of dollars in subsidies directed to airline companies on the condition that they not lay anybody off. And now we’re seeing that. The airline subsidies that kept people employed are expiring this month actually. And airlines have already made it clear they’re going to be laying off tens of thousands of people. So here we’ve spent tens of billions of dollars to keep people waiting around for jobs that in many cases are not going to come back. 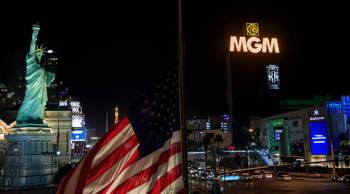