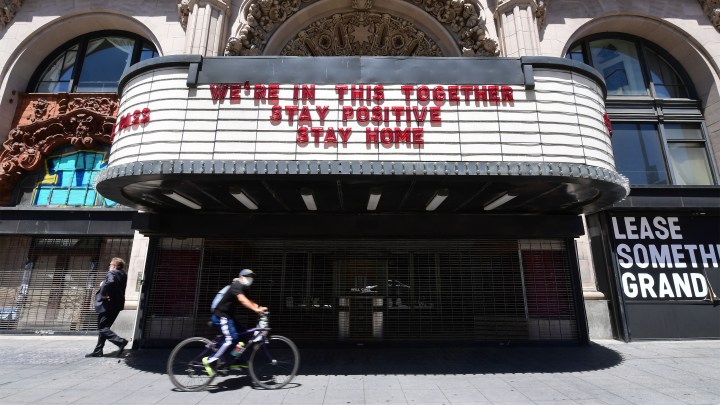 COPY
A shuttered theater in Los Angeles. People laid off early in the pandemic who are still out of work are approaching what the Labor Department defines as long-term unemployed. Frederic J. Brown/AFP via Getty Images
COVID & Unemployment

A shuttered theater in Los Angeles. People laid off early in the pandemic who are still out of work are approaching what the Labor Department defines as long-term unemployed. Frederic J. Brown/AFP via Getty Images
Listen Now

It will soon be six months since the COVID-19 pandemic slammed into the U.S. economy. In March and April, 17 million Americans lost their jobs and became unemployed in the first wave of pandemic layoffs.

As of July, according to the BLS monthly jobs report, only 6.7 million — or 40% — of the newly unemployed were working again. As job growth continues to slow in the economic recovery, and workers who were initially put on temporary layoff or furlough are permanently laid off by their employers, millions of Americans face the prospect of falling into long-term unemployment.

COVID-19 has not been good to the live-events business. Rock concerts and festivals all but shut down on a dime in early spring.

That’s when 33-year-old Jason George of Benton Harbor, Michigan, got laid off. “Like many of my co-workers in the industry, we’ve been furloughed for a very long time,” George said.

Initially, George was put on temporary layoff from his job managing artists and shows for an event promoter. He got approved for Michigan unemployment ($350 a week, plus $600 a week in federal pandemic benefits until that program expired at the end of July). His employer kept paying his benefits, and he waited for a callback once the stay-at-home orders eased.

But by midsummer, venues still hadn’t reopened for large gatherings. And as of Tuesday, George’s employer made his temporary layoff permanent. Benefits continue to be paid through the end of the month.

“It does feel different,” George said, “because there’s not that safety net there anymore that I could possibly go back sooner rather than later. So it does feel official, like we’re on our own to figure things out for ourselves.” George’s wife is working more shifts at the restaurant where she serves, and he’s building up a freelance business to help make ends meet.

A lot more laid-off workers are likely to end up like Jason George in the coming months.

“It’s very unlikely that if you’ve been furloughed for this length of time that you’re going to go back to your current employer,” said Daniel Sternberg, head of data science at Gusto, an HR platform for small businesses.

Sternberg said that if a worker got furloughed in March, there was a 30% chance they’d be called back to work by April “because your company received [Paycheck Protection Program] funds or was able to reopen in some capacity. But then if we go out into future months, smaller and smaller percentages returning to work.”

By July, only 37% of furloughed workers had been called back.

And people laid off early in the pandemic are now approaching what the Labor Department defines as long-term unemployment: more than 26 weeks without employment, looking for work.

At that point, jobless benefits begin to run out. (States typically provide 26 weeks of regular benefits; after that, emergency extensions sometimes pay benefits for longer periods.) The long-term unemployed start to go through their savings to pay their bills, and their chances of getting reemployed decrease.

Harvard economist Gabriel Chodorow-Reich (along with economist John Coglianese at the Federal Reserve) have come up with projections for long-term unemployment as the pandemic downturn continues.

“In our baseline simulation, in early 2021, 4.5 million people will have been unemployed for more than 26 weeks,” said Chodorow-Reich. “A more pessimistic scenario is that number rises to more than 5 million.”

That would still be fewer than the peak of more than 6.5 million long-term unemployed caused by the Great Recession.

Recent polls have found that only a third of laid-off workers think they’ll be able to return to their jobs. And a quarter of those who are still working worry they’ll lose their jobs as the pandemic drags on.