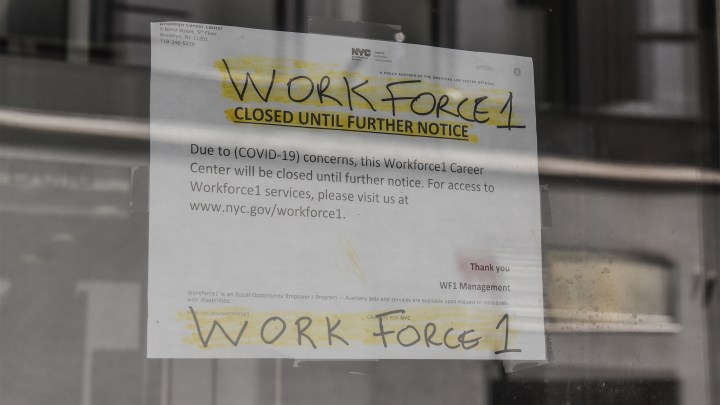 New initial unemployment claims hovered around 1.5 million yet again last week. The number of people who filed new claims fell slightly in the second week of June, by 58,000. But the total number of newly laid-off people filing claims was still over 2 million, which is staggeringly high, and has been staggeringly high for about three months now.

All told, more than 30 million people are now on unemployment — including regular state and federal pandemic unemployment — about 1 in 5 of those who had a job before the pandemic.

Economists have been hoping to see the number of unemployed people come down as the economy starts to reopen and some workers get called back. But new layoffs are offsetting that, meaning we may be getting closer to a permanent, persistent high-unemployment problem.

James Gamboa is 46, a bartender by trade. He was furloughed back in March at the hotel where he worked in Miami.

“I am still on a temporarily laid-off basis,” Gamboa said. “But at least I haven’t been officially let go.”

So he’s in limbo. Like about 15 million other Americans who consider their layoff temporary.

Only, what if they’re not temporary?

“We’re at a very perilous moment,” said Bernie Baumohl, chief global economist at the Economic Outlook Group. He said with the pandemic still raging, no vaccine and consumers staying home, companies may reopen but have few customers.

“If it turns out there is no justification for them to bring back workers, more of those employees that have been put on furlough may end up being permanently laid off,” Baumohl said.

The payment processor Kronos, a Marketplace underwriter, tracks how many people are working in real time. Dave Gilbertson, vice president of strategy and operations at Kronos, said early in the pandemic, hours fell nearly 40%. That has turned around.

“Half of the people that had been not working are kind of working again,” Gilbertson said. “But we’re still at historic lows in terms of the amount that we still have to claw back.”

Meaning, unemployment — including $600 a week in federal pandemic benefits — will be crucial to keeping families afloat, said Jay Shambaugh, director at the Hamilton Project. And unless Congress extends them, those federal benefits will run out on July 31.

“If that expires, the average person out there on unemployment, instead of getting $1,000 a week will suddenly be getting $400,” Shambaugh said. He estimates jobless benefits are putting more than $100 billion a month into unemployed workers’ pockets right now.