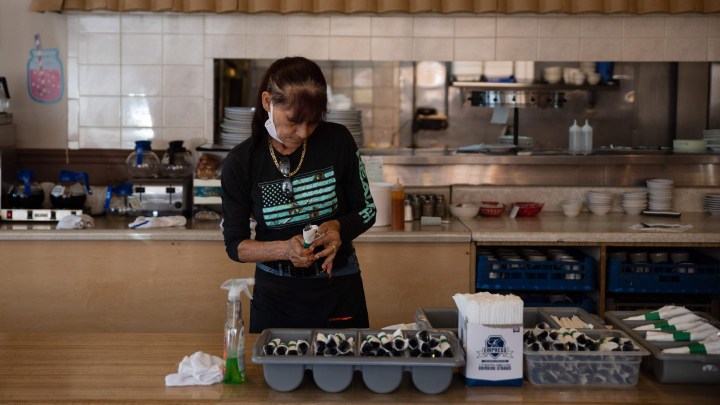 COPY
A waitress folds silverware at a restaurant in Youngstown, Ohio, in September. Small businesses are having trouble hiring even though millions of Americans are out of work. Megan Jelinger/AFP via Getty Images
COVID & Unemployment

A waitress folds silverware at a restaurant in Youngstown, Ohio, in September. Small businesses are having trouble hiring even though millions of Americans are out of work. Megan Jelinger/AFP via Getty Images
Listen Now

You might think that in the middle of this pandemic economy, with millions of Americans out of work and the unemployment rate hovering around 8%, it’d be easy for businesses to find workers to hire right now. But a recent report from the National Federation of Independent Business found that over a third of small businesses have open positions they haven’t been able to fill.

“We cannot get somebody in to interview for the life of us,” she said. Dreeuws says she’s floored. “We get hits all the time, we call, we set up interviews and most of the time they don’t show.”

That usually doesn’t happen in a job market like this one.

“I can genuinely use this word — it’s unique. We’ve never seen this before. This is one of a kind,” said Nick Bunker, research director at the Indeed Hiring Lab.

Bunker said one unique factor is that many unemployed workers aren’t actually looking for new jobs. That’s because over a third of them are on temporary layoff, “which means they’ve been told they have a job to return to when the business can recall them,” he said.

As a result, the labor force is shrinking. Women have been dropping out of the workforce at high rates. Teresa Ghilarducci, professor of economics and policy analysis at The New School, said there’s another challenge for smaller companies: They often can’t afford to pay workers as much as larger businesses.

“They don’t have the same kinds of benefits that larger businesses do,” she said. “So you find that small businesses are plagued by a lot of turnover.”

Federal unemployment benefits have dried up, and the future of more government relief is unclear. Many big companies — including Disney, American Airlines and United Airlines — have announced new layoffs. Or that temporary layoffs they announced months ago are actually permanent.

“A lot of other businesses related to the travel industry are going to find that they can’t promise their laid-off workers that they’re going to come back any time soon,” Ghilarducci said.

As a result, she said, small businesses probably won’t have trouble finding workers in a few months.