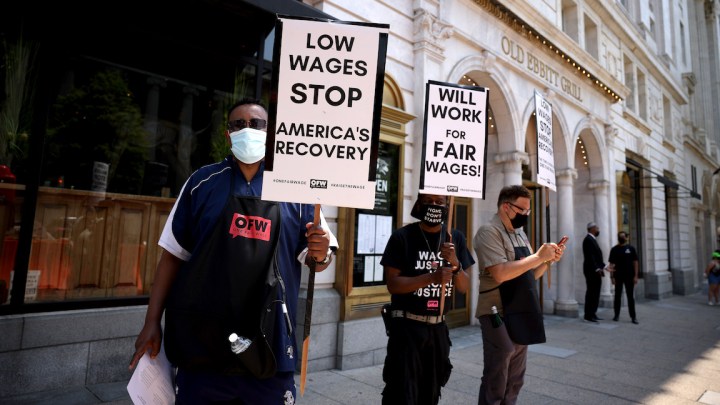 Eighty percent of companies that are looking to hire mostly “industry and manual services workers” are having a tough time finding them, according to a survey out Wednesday from The Conference Board.

That’s been the story for a few weeks now — employers getting desperate while workers are in no hurry to go back to jobs with lousy compensation or bad work environments.

More and more states are trying to push folks back into the workforce by cutting unemployment benefits and, increasingly, by requiring people to prove they’re actively looking for work.

In many ways, this is just going back to the way things were pre-pandemic.

States suspended requiring people to look for jobs to get benefits when there weren’t really any jobs, and people were supposed to be staying at home. But now that employers are struggling to fill positions, the rules are kicking back in.

“This is mostly related, I would say, to people who are being called back by their former employer,” said Andrew Stettner, a senior fellow at the Century Foundation.

“In those situations, you generally, if you’re on unemployment benefits, you do have to go back to that former employer or else you lose your benefits,” he said.

But a lot of people may not want to go back to their old jobs or even the industry they worked in before.

Kate Bahn, director of labor market policy at the Washington Center for Equitable Growth, said these requirements “may make businesses be able to hire workers, particularly in the short term, but I don’t think it encourages sustainable quality job matches, even for those businesses.”

Because, she said, those workers probably won’t stay very long in jobs they were kind of forced to take.

But the job search requirement is politically pretty popular, has bipartisan support and many businesses looking to hire are demanding it.

“Employers have a understandably single-minded view of success in this situation. They want to hire someone at the wage that they’re willing to pay,” said Kathryn Edwards, an economist for the Rand Corp.

But, she said, it’s better for workers — and the economy — for people to spend a bit more time on unemployment so they can land a better job down the road.

Correction (June 3, 2021): A previous version of this story misspelled Kathryn Edwards’ name. The text has been corrected.