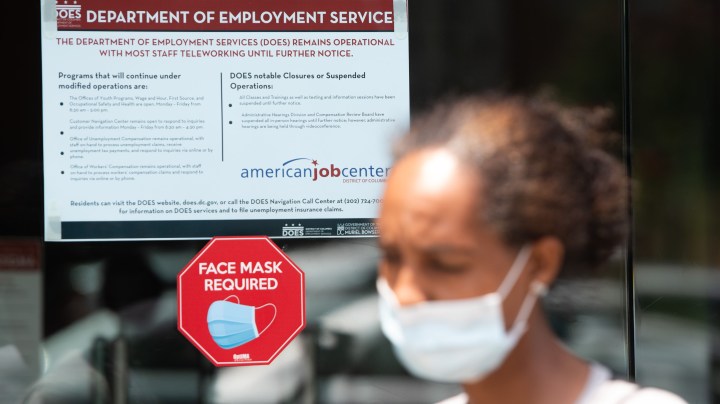 COPY
A new report shows that Black applicants were less likely to receive federal unemployment benefits when compared to white applicants — something which also occurred during the Great Recession. Saul Loeb/AFP via Getty Images

A new report shows that Black applicants were less likely to receive federal unemployment benefits when compared to white applicants — something which also occurred during the Great Recession. Saul Loeb/AFP via Getty Images
Listen Now

Hundreds of thousands of unemployed workers have now lost federal jobless benefits as Republican-led states cut off the pandemic emergency programs early. The benefits are set to expire nationally in September.

Although unemployment has fallen as vaccinations increase and economies reopen, it remains highest for Black workers, as it was prior to the pandemic. At more than 9% in May, Black unemployment was nearly double the rate for white workers.

“We started noticing some potential racial disparities in the way that beneficiaries were being approved for benefits,” Costa said.

It’s a pattern familiar to William Spriggs, an economist at Howard University. “This disparity is well known and has been documented. During the Great Recession, we had the same problem,” Spriggs said.

It’s partly by design, Spriggs added — back when the unemployment system was established in the 1930s, it excluded a lot of workers from eligibility.

The workers Spriggs is referencing were — and still are — disproportionately Black. Federal pandemic unemployment programs should have helped compensate for inequities at the state level by expanding relief to more types of workers, but those programs are administered by the states and have very different systems, according to Andrew Stettner, a senior fellow with the Century Foundation.

“People of color tend to be concentrated in some of the states that are the most restrictive for unemployment benefits, like the Deep South and the Southwest,” Stettner said.

The unemployed in those areas often have to navigate long and complicated online applications or fight months-long appeals to get benefits, Stettner said, putting workers of color with fewer resources at a disadvantage.