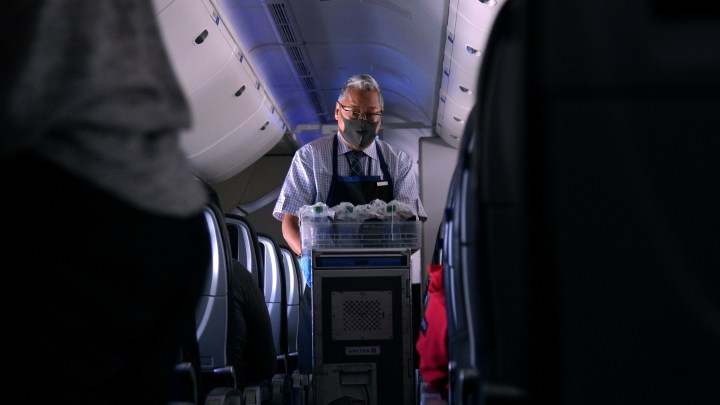 COPY
A flight attendant passes out refreshments. Airlines are among the industries that could rehire workers once pandemic relief is distributed. Michael Loccisano/Getty Images
COVID & Unemployment

A flight attendant passes out refreshments. Airlines are among the industries that could rehire workers once pandemic relief is distributed. Michael Loccisano/Getty Images
Listen Now

No matter what happens regarding the congressional pandemic relief bill, the indications are that it will offer loans or other assistance to companies to rehire workers who have been furloughed or laid off over the last nine months.

From hard-hit small businesses to airlines and hospitality industries, when employers are ready to rehire, they will have a lot of options.

Lauren Rivera, professor of management and organizations at Northwestern’s Kellogg School of Management, explained that “right now, there’s just so, so many people looking for work.”

He suggested they might ask, “Why shouldn’t we use this opportunity to look around a little bit and see if there’s somebody we would rather have? After all, you know, it’s been almost a year now without having him around.”

Legally, employers are free to court other candidates, said Heidi Shierholz, a labor economist at the Economic Policy Institute.

“For the vast majority of workers, there is no legal right of recall, if the employer starts hiring again,” Shierholz said. “The exception to that is for unionized workers,” who often have specific rules about hiring and recall in their bargaining agreements.

The cost of bringing on new employees is also a consideration. It’s usually expensive. Rehiring a worker may mean reissuing equipment and restarting emails. That’s still thousands of dollars cheaper than onboarding and training a new employee.

Another cost saving in bringing back a former employee, according to Shierholz: “You don’t have to, for example, do reference checks. You already know all about this worker because they were already your worker. You are the best reference.”

Companies also need to think about employee morale. Erin Hatton, a sociology professor at the State University of New York at Buffalo, said that once furloughed employees are hired back, they “may very well harbor ill will and be less likely to commit, to go over and beyond the way they may have before.”

But, Hatton added, right now workers are in a pretty vulnerable position. So if they get called back, chances are good they’ll return.