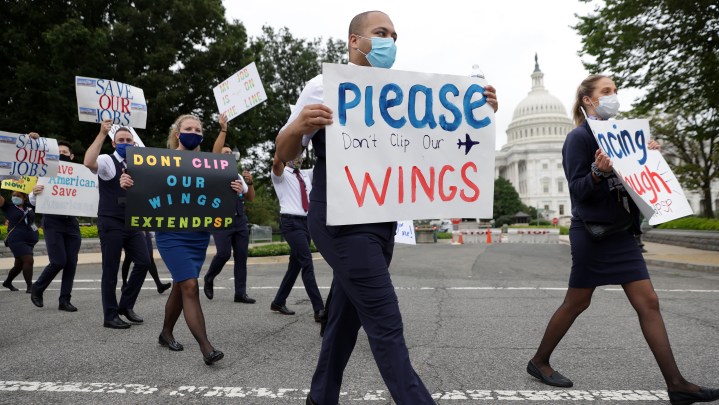 COPY
Flight attendants and other aviation workers participate in a march near the U.S. Capitol on Sept. 9, calling for extended airline support. Alex Wong/Getty Images
COVID-19

Flight attendants and other aviation workers participate in a march near the U.S. Capitol on Sept. 9, calling for extended airline support. Alex Wong/Getty Images
Listen Now

It’s shaping up to be a bad week for employees of commercial airlines. In exchange for a federal bailout earlier in the pandemic, carriers had agreed not to cut the ranks of pilots, flight attendants, ground crews and management until Oct. 1. Airlines are expected to begin announcing more than 35,000 job cuts Thursday.

When I asked Janet Bednarek, a professor at the University of Dayton who studies urban and aviation history, what the past few months have been like for the airlines, she didn’t even pause: “Armageddon.”

“This is the worst crisis in the history of American aviation,” she said.

A crisis for the airlines, for the airports, for the soon-to-be-unemployed. And for the hub cities — Charlotte, Chicago, Dallas-Fort Worth.

“For every direct airline employment loss, there’s about seven or eight, support and derived job losses elsewhere in the community,” said Robert Mann, an aviation analyst.

These losses will ripple across the U.S., even to cities that aren’t hubs, said Kevin Healy, the president and CEO of consulting firm Campbell-Hill Aviation Group.

“A significant percentage of those employees don’t necessarily live where they’re based,” Healy said.

The hubs will still have planes flying in and out, moving cargo such as medical supplies. And because they had such good airline service before, those cities have other industries to cushion the loss. More affected by these job cuts, said Brett Snyder of the blog Cranky Flier, will be smaller places like Williamsport, Pennsylvania, which will lose a regular American Airlines flight, for example.

“It hurts some of the local businesses,” Snyder said. “It’s something that if it holds up in the long run that they don’t have service, then it could be a risk to the economies.”

And those cities will have a harder time rebounding when air travel returns to its pre-pandemic levels.