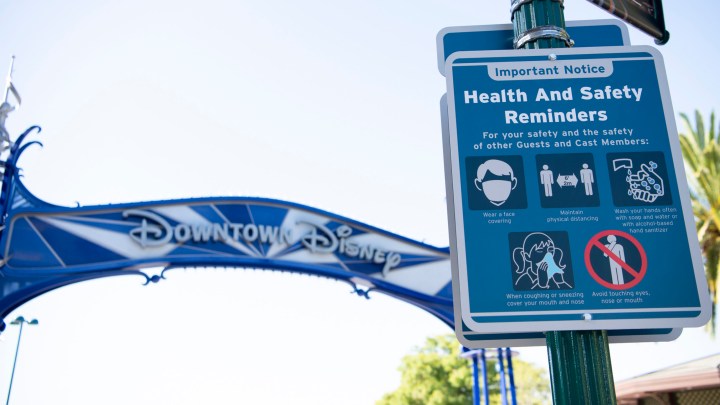 COPY
The company says two-thirds of those who will be laid off are part-time employees. Derek Lee/Disneyland Resort via Getty Images
COVID-19

The company says two-thirds of those who will be laid off are part-time employees. Derek Lee/Disneyland Resort via Getty Images
Listen Now

Disney has just announced a huge number of layoffs: 28,000 people will lose their jobs, many from its theme parks, with Disney World in Florida running at limited capacity and Disneyland in California still closed.

Disney employs about 100,000 workers at its U.S. theme parks. The company says two-thirds of those who will be laid off are part-time employees.

The head of Disney’s theme parks unit said in a statement that uncertainty over the pandemic’s duration had made cuts unavoidable, while also blaming California’s “unwillingness to lift restrictions that would allow Disneyland to reopen.”

In Florida, Walt Disney World is open at limited capacity after the company reached a deal with unions representing workers there on various health safeguards.

Disney workers’ unions released a statement expressing disappointment over the layoffs, saying they have begun negotiations over details such as extended health benefits for affected workers.

Disney posted a loss of almost $5 billion for the three months ending in June, its first quarterly loss in nearly two decades.