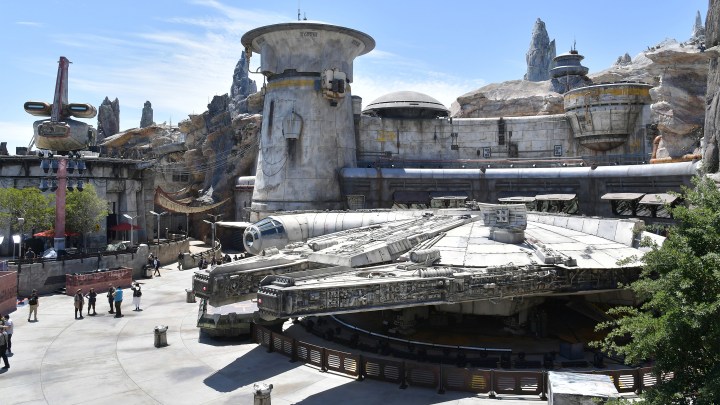 Disneyland opened a long-awaited, 14-acre section of its Anaheim, California, park to the public Friday. Star Wars: Galaxy’s Edge is set on a fictional planet called Batuu. It’s a pretend world where visitors can spend a lot of real money.

Visitors can build and buy their own droid for $99 or a lightsaber for $200; drink a glass of blue milk in a cantina full of space smugglers and bounty hunters; see a full-size replica of the Millennium Falcon ship; and get a glimpse of “Star Wars” characters like Chewbacca.

Galaxy’s Edge has one ride at the moment and another in the works. But Don Munsil at the travel website MouseSavers.com said the rides aren’t really the point.

“The land is the ride, you know? The experience of being there is supposed to be a lot of the enjoyment factor,” he said.

Seth Kubersky, who co-wrote the “Unofficial Guide to Disneyland,” said Galaxy’s Edge is a way for Disney to compete with the Harry Potter-themed worlds at Universal theme parks. They showed that you can build an entire land around just one intellectual property.

“And not only can you do it, but it will make fans flock from all over the world and spend a lot of money on special merchandise and beverages that they can’t get anywhere else,” he said.

On planet Batuu, you’ve got four hours to buy your lightsabers and droids. After that, a stormtrooper will escort you out.