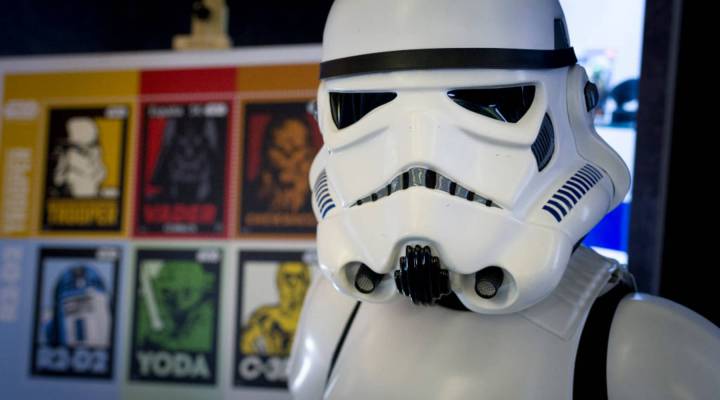 Happy 40th birthday, “Star Wars”! May the Force be with you.

Over the past four decades, “Star Wars” has gone from a movie to a multibillion dollar franchise. And if Disney has any say in it, the “Star Wars” empire is likely to get even bigger. Come December of this year, Disney  —  which bought Lucasfilm for an eye-popping $4 billion in 2012  —  will release “Star Wars: The Last Jedi.” If the last couple of “Star Wars” movies are anything to go by, the latest movie is likely to rake in close to a billion dollars in box office sales ensuring that Disney gets back every penny it paid for Lucasfilm.

To celebrate the franchise’s four decades, let’s check out some numbers:

Where it all began: When the first “Star Wars” movie opened on Wednesday, May 25, 1977, it was playing in just 32 theaters. By Saturday, it was playing at 43 theaters and by August the movie was in more than 1,000 theaters. That first weekend, “Star Wars” brought in $1.5 million in sales. According to the New York Daily News, that is “about the same as ‘Smokey and the Bandit,’ which opened the same weekend in 300 theaters.” That was only the beginning …

The licensed merchandise, aka toys: As Disney prepared to release “Star Wars: The Force Awakens” in December of 2015, “Star Wars” toys flooded the shelves of all major retailers. One analyst told the Wall Street Journal that “Star Wars” toys could generate as much as $2 billion in sales in the last four months of 2015.

In 2016, at the end of which “Rogue One: A Star Wars Story” was released, the “Star Wars” franchise is estimated to have been responsible for a 4.4 percent bump in the global retail sales of licensed merchandise, which rose to $262.9 billion.

Chris Taylor, author of “How Star Wars Conquered the Universe,” estimated that “Star Wars” raked in about $42 billion by 2014 — $32 billion in merchandise, $4 billion at the box office and another $6 billion on home video.

Most recently, “Star Wars” fans could purchase a $1.4 million Darth Vader mask. Why so expensive? Because it’s made of solid 24-karat gold. Sadly, even if you could afford it, you would not be able to wear the helmet as it weighs about 33 pounds, reported the New York Times.

Records, schmecords: When “The Force Awakens” was finally released that December, previous records didn’t really stand the chance. Thursday-night previews alone bought in $57 million, according to Variety. The movie went on to set a new record for opening weekend with $248 million in sales at the U.S. box office and $529 in worldwide box office sales, according to Bloomberg. Overall, the movie brought in $2.07 billion at the box office — about half of what Disney paid for Lucas Films.

George Lucas Arts Museum: We first heard about the museum before “The Force Awakens” opened in theaters (Yes, we now measure time in “Star Wars” movies). When it was first announced, it was estimated that the museum could generate between $2 and $2.5 billion in direct economic impact over ten years. Earlier this year, Lucas announced that the museum will be built in Los Angeles and that he would put $1 billion towards the project. In an interview with the Los Angeles Times, the LA Mayor Eric Garcetti said that the construction of the 275,000-square-foot museum would lead to creation tens of thousands of jobs in construction.