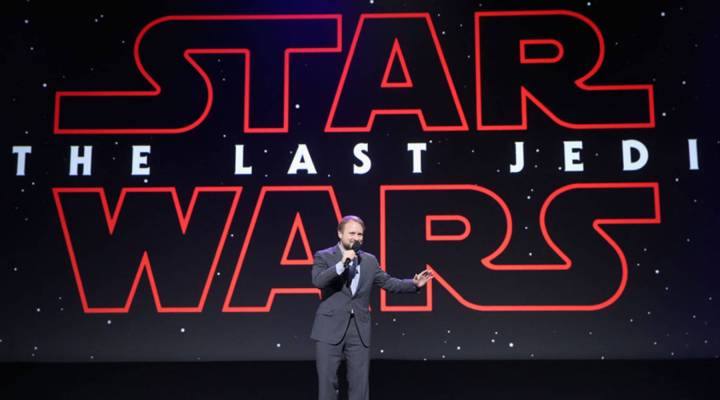 If you’re a theater looking to screen “Star Wars: The Last Jedi” this December, you might find things a little tougher than usual. Disney, which owns the studio behind “Star Wars,” is requiring theater owners to fork over a hefty portion of ticket sales along with other stipulations that make showing the film a financial burden on many small theaters. Marketplace host Kai Ryssdal talks with Erich Schwartzel, who wrote about Disney’s tough tactics for the Wall Street Journal.

Kai Ryssdal: What are the terms here that Disney is imposing on all these theaters?

Erich Schwartzel: They are unprecedented in their scope. They are going to receive 65 percent of all ticket sales on this next “Star Wars” movie. They also can require theaters to hold the theater for four weeks. So that means this new “Star Wars” movie will show in the biggest auditorium at any theater for a minimum of a month, even if on Day 28, everybody who’s going to see it has seen it and they’re playing to an empty house. And that’s a real problem if you only have one auditorium in your whole theater. And so I spoke with some smaller theater owners, like this one guy who runs a theater in Elkader, Iowa, which has a population of about 1,200 people, and he’s not showing the new “Star Wars” movie, which might sound like a bad business move on his part. But he says after two weeks, he literally runs out of people to show it to.

Ryssdal: Are they doing this, Disney, simply because they can?

Schwartzel: Yes, they have unprecedented market power right now. One film buyer I spoke to said they are the most powerful studio maybe since MGM in the 1930s. They have an unbelievable market share. Their movies are guaranteed hits, and they know what they have. And so they can ask theaters to adhere to these terms, and very few are going to say no.

Ryssdal: And they’re doing that with fewer movies on the market than most other major studios, right?

Schwartzel: Right. They released 13 movies in 2016 and yet had a 26 percent market share of the total box office. And I think the next-highest market share was Warner Brothers, and they had released, I think, more than 20 films that year.

Ryssdal: A word here about the relationship between theaters and studios. And I should’ve known this, it should have occurred to me, but it dawned on me when I was reading this article. There’s actually contractual relationships, right? I mean, the studios sign a contract with Disney that says  x, y, z, and if you don’t do this then we’re going to take, you know, your first-born child.

Schwartzel: Right. Or about 5 percent, which for some theaters after this year is the equivalent of a first-born child. They’re not doing so well.

Ryssdal: Right. That’s the other part of this, is that the box office sales are down, generally speaking, which gives Disney more oomph.

Schwartzel: Exactly. And there’s been this mantra among theater owners, you know, whenever they have to talk to investors on these conference calls for the past couple of quarters, it’s just been bad news after bad news. But this mantra that they’ve been giving is, “Wait until December, wait until December, wait until December,” and they just keep saying “Star Wars” and some other big releases in the fourth quarter will compensate for the losses that they’ve seen. So you’re coming into these negotiations with Disney, the most powerful studio in Hollywood history, with their biggest movie, and theater owners really hurting. You can see how lopsided the leverage has become.

Ryssdal: Have you bought your tickets?

Schwartzel: I have not.

Ryssdal: No, you probably get a freebie, right? If you work in the film industry.

Schwartzel: There is no easy way to say this. I usually go to the premiere, although I haven’t gotten invited to this one yet. I don’t know if I will go after this story.