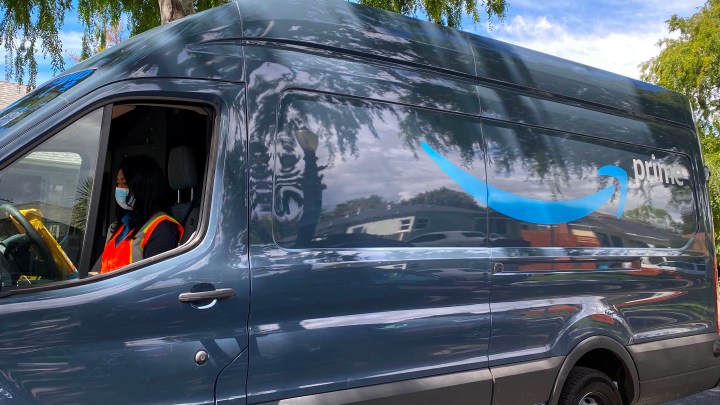 A delivery worker for Amazon Prime wears a mask and gloves on her route in Los Angeles. Chris Delmas/AFP via Getty Images
COVID-19

A delivery worker for Amazon Prime wears a mask and gloves on her route in Los Angeles. Chris Delmas/AFP via Getty Images

Those highly paid positions will be remote for now, with several thousand of them spread across the country near planned satellite offices in cities from San Diego to Phoenix, Dallas, Detroit and New York. The hiring plan strikes a contrast to the search for one big second headquarters, called HQ2, several years ago.

When Amazon announced its HQ2 search in late 2017, it turned into a battle royal between cities competing for tens of thousands of good-paying tech jobs.

But all the slick videos and billions of dollars in incentives weren’t enough to stop Amazon from choosing the rather predictable New York and Washington, D.C., areas, said Greg LeRoy at Good Jobs First.

“You know [it was] the biggest trophy hunt ever in U.S. economic development history,” he said. “So it’s fascinating to see this backflip now.”

With the pandemic sending most tech workers home, Amazon and other large tech companies may finally be shifting their working model, said Steven Pedigo, a professor at the LBJ School of Public Affairs at the University of Texas at Austin.

“Rather than all of these workers being concentrated in, say, this new HQ2 facility in Washington, D.C., or in Seattle, maybe you’re more open to these sort of remote hubs,” he said. “For many second-tier cities, that’s probably a good thing.”

He said it’s easier for smaller cities to sell themselves to individual remote workers with affordable housing or charming downtowns than it is to meet the infrastructure demands for a big company headquarters.

Richard Florida, an urban studies professor at the University of Toronto and author of “The Rise of the Creative Class,” said tech companies still consider major hubs like Silicon Valley as key to innovation and growth.

“I think that you’re not going to see a big departure from the pattern of corporate headquarters location that we’ve seen,” he said. “But you will see some adaptation and some tweaking at the margin,” like more satellite offices outside city centers that allow workers to be closer to affordable housing but within easy reach of the big cities he said are the engine of big ideas.