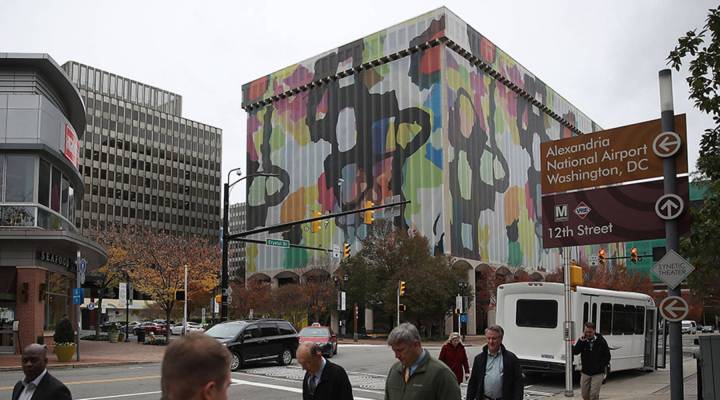 COPY
A tarp drapes 1851 S. Bell Street, one of the office buildings left empty after the Crystal City area of Arlington, Virginia lost tens of thousands of workers due to government budget cuts and military relocations. Mark Wilson/Getty Images

A tarp drapes 1851 S. Bell Street, one of the office buildings left empty after the Crystal City area of Arlington, Virginia lost tens of thousands of workers due to government budget cuts and military relocations. Mark Wilson/Getty Images
Listen Now

In all the talk about Amazon’s new headquarters in New York and Northern Virginia, much of the discussion focuses on what Amazon received in exchange for the 25,000 jobs headed for each new location. But the cities on the receiving end of these deals had demands as well.

In Virginia, the commonwealth is using the deal with Amazon as part of an ongoing process to diversify the economy of Northern Virginia. In the 25-page memorandum of understanding between the commonwealth and Amazon, there are details about tax breaks and grants for the online retailer, as well as salary requirements and development promises for Arlington County in Virginia.

One clause in particular is relevant to economist Jeanette Chapman of the Fuller Institute, who co-authored an economic impact report on HQ2 in Virginia.

“If more than 10 percent of the New Jobs at the Facility are primarily engaged in supporting Federal Government Contracts, that percentage over 10 percent will be used to adjust downward the Grant Payment for that calendar year that otherwise would be due to the Company.” (MOA, page 5)

In other words, Virginia doesn’t want too many of Amazon’s new employees tied to work for the federal government. Chapman said the clause may not mean much to Amazon, but it reveals a great deal about what matters to the local economy.

“The commonwealth has very wisely said, well we already have a lot of [those kinds of jobs] and we’re not going to incentivize that,” Chapman said.

This is particularly important in an area known now as Crystal City, which is being rebranded as National Landing. It’s location just across the river from Washington, D.C., and just across the street from the Department of Defense headquarters at the Pentagon, historically made the area heavily reliant on the business of government.

Empty office space in Crystal City, an area being rebranded as “National Landing” as the area prepares for HQ2.

“It was a place where other DoD workers, and contracts associated with the D0D, could go and have office space that wasn’t quite as expensive as downtown D.C.,” Chapman said.

That’s what attracted Marine veteran Isaac Barnes when he was co-founding his tech business, Eminent IT.

“I thought for our business — being DoD-focused — this will be one of the best places for us to be. So when we travel, we have a short commute,” Barnes said. “[It’s] not even a block. It’s crossing the street. One light.”

But that perk for Barnes proved to be a vulnerability for Crystal City uniquely. A combination of automatic government spending cuts from sequestration, plus the relocation of military offices and contractors through the Base Realignment and Closure process, hit the area hard over the last decade or so.

“That moved about 17,000 DoD workers outside of Crystal City … and along with that went probably about 10,000 contractors,” said economist Chapman. “It vacated more than 4 million square feet of office space over of course of just a few years.”

“It was scary for a lot of people,” Barnes said. “A lot of people thought Crystal City would become a ghost town.”

But, as Barnes points out, Crystal City didn’t become a “ghost town.” As the defense workers left, the community focused on diversifying the local economy, with a new Business Improvement District heavily recruiting nonprofits, media companies, and tech firms to relocate to the area.

Though some empty buildings remain, several are wrapped in giant-scale artworks until they can be filled or repurposed. One old government office building has been transformed into an apartment building and restaurants, another building once home to an agency now houses a nonprofit.

While local developers and business owners say they are grateful Amazon is bringing HQ2, they are quick to point out Crystal City was already transitioning away from its reliance on the federal government to fuel the economy. Nevertheless, the remaining vacant buildings — as well as recent memories — serve as reminders of what Crystal City/ National Landing is determined to keep from happening again.