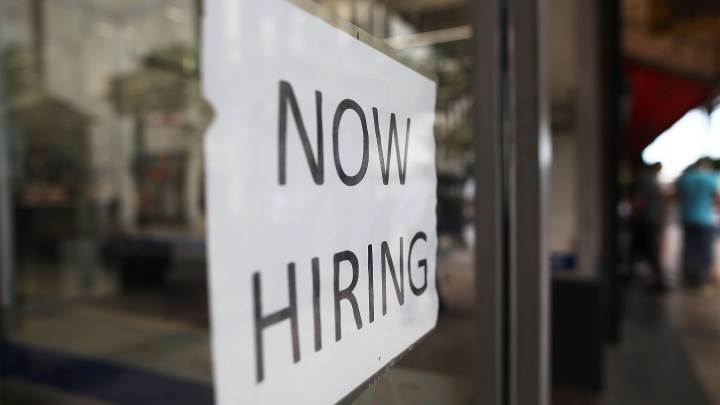 COPY
A global pandemic might seem like an odd time to hire a lot of new workers, but some companies need the extra hands. Joe Raedle/Getty Images
COVID-19

A global pandemic might seem like an odd time to hire a lot of new workers, but some companies need the extra hands. Joe Raedle/Getty Images
Listen Now

The pandemic shutdown is absolutely hammering a lot of retailers. The CEO of Gap, Sonia Syngal, told The New York Times this week that she expects tens of millions of job losses in the sector.

But some retailers are hiring. Amazon, Walmart, Kroger and CVS are so busy that they’re out to hire armies of temporary workers to manage the surge in demand. Walmart has 150,000 job openings. Amazon has 100,000.

Many retailers do have experience hiring a bunch of temporary workers quickly. They do it every year for the holidays.

“The difference now is you simply have to do vastly more hiring in vastly less time,” said Joel Rampoldt, a retail consultant with Alix Partners. He said Walmart, Amazon and other big employers have well-oiled systems for new hires. But with the increased demand they’re facing, they’ve got to speed them up.

“There simply can’t be the same level of screening that you would normally do,” Rampoldt said.

A hiring process that usually takes weeks is being condensed to less than a day in some cases. Walmart is taking applications by text message and Domino’s Pizza is doing video chat interviews. New workers are starting shifts before employers finish their background checks.

Millions of newly unemployed people are available for work, but Andy Challenger of outplacement firm Challenger, Gray & Christmas said some of them may hesitate.

“The jobs they’re asking people to do have this inherent risk that those jobs normally don’t,” Challenger said.

Amazon and Walmart have sweetened their offers by raising the pay for many of the jobs by $2 an hour. Meanwhile, the pandemic means employers have to do a little more work to onboard new workers, according to David Marcotte of Kantar Consulting.

“There is versus previous times an additional layer of training, which is ‘I need to keep you safe,’ ” Marcotte said.

But, he said, with sales at many retailers soaring, the added costs are probably worth it.