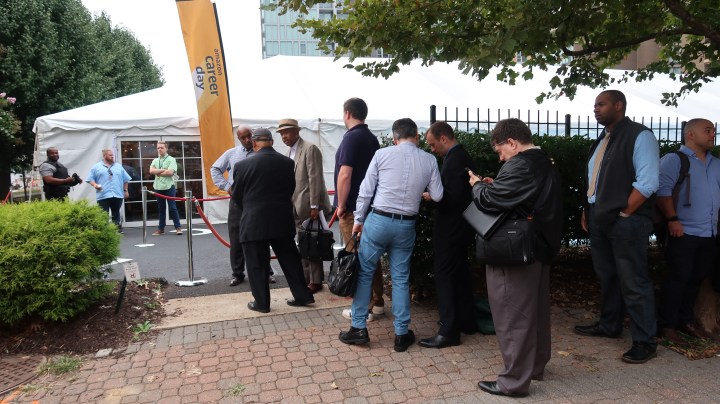 Thousands of people lined up for a daylong career fair on a humid, mid-September morning in Crystal City, Virginia, some showing up as early as 5:30 a.m. to be ready when the doors opened at 8 a.m. — all for a chance at a job with Amazon.

Everything around the company seems to be done on a large scale, from a recent announcement about environmental initiatives to the very public contest for the company’s second headquarters. Given the size of the company, with stakes in many different industries, just about everything Amazon does can ripple through the economy.

That’s especially true in Crystal City, part of Arlington County, Virginia, which was one of the winners of Amazon’s HQ2 contest. With so much attention on the expected 25,000 jobs coming with the company’s expansion in the area, the advertised career fair brought many people hoping for one of those jobs or some of the recently announced 30,000 jobs Amazon plans to hire this holiday season.

First in line was 56-year-old Charles Bailey, who said he had been in line since 5:30 a.m. Even though he already has a full-time job, he said he was “looking for something in the warehouse industry,” given his experience managing warehouses and using forklifts.

Also waiting his turn was 34-year-old Raeford Smith, who has already applied for several tech jobs at Amazon.

“There’s a lot of people out here trying to find a job,” he said, looking back at the hundreds of people in line. He said the excitement about HQ2 was bringing everyone out on the humid morning. “[Amazon’s] going to really change the game here in the D.C. metro area,” he said. “So, you know, everybody’s just trying to be along for the ride.”

But there would be no job interviews for Smith or anyone else that day. Amazon won’t be hiring tens of thousands of people here anytime soon, although dozens of smiling Amazon staffers encouraged visitors to apply online for the roughly 200 jobs that were available immediately.

The Career Day was more of a very public — and media-friendly — Amazon meet and greet for the region. Ardine Williams, Amazon’s vice president of workforce development, pointed out the hiring for HQ2 was always going to be a slow process.

Many attendees at the fair were disappointed, even frustrated, they wouldn’t walk away with a new job that day. But for some, the prospect of job at some point was enough. Thousands of people packed into the tent throughout the day, even if it was just for a resume review or to get a physical resume into someone’s hands.

But for now, Amazon’s economic impact on the region isn’t through a huge influx of high-tech jobs.

“Everything that’s happening right now is in anticipation and preparation of the ramp up for the actual hiring,” said Jeannette Chapman, an economist and deputy director of the Stephen S. Fuller Institute at George Mason University. Chapman carefully tracks Amazon’s economic impact on the region and said that “ramp,” rather than including thousands of jobs, includes “the permitting process that needs to happen for the new buildings, the renovation of the space for the first round of employees and the very first phase of hiring.”

“The labor force here is very, very tight. And so I think that’s probably what they’re trying to suss out with some of these bigger fairs of just saying, ‘Well, we know the unemployment rate is 3.2%. What does that translate to … in terms of what kind of labor we can get?'” Chapman said.

Because the Amazon jobs will be coming to the region over a long period of time, the impact of HQ2 will be muted, even on one of the major concerns in the area — housing prices.

“Housing prices here are expensive, and Amazon hasn’t changed that,” said Chapman. “It’s made people more aware of that.”