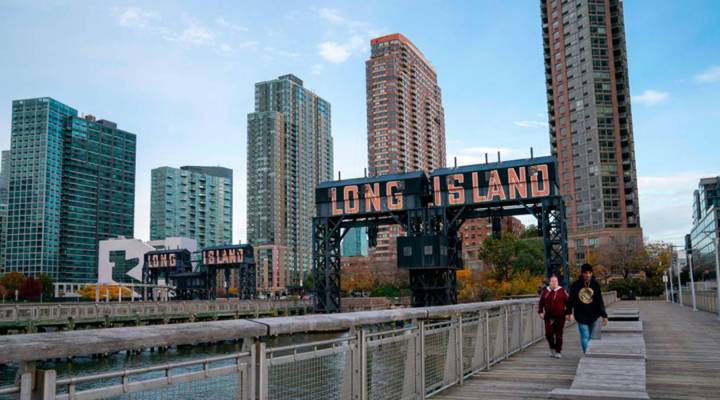 COPY
A view of the waterfront of Long Island City in the Queens borough of New York, along the East River. DON EMMERT/AFP/Getty Images

A view of the waterfront of Long Island City in the Queens borough of New York, along the East River. DON EMMERT/AFP/Getty Images
Listen Now

Devin Garner has been dying to move out of his parents’ house. His dream location: Long Island City.

“You’re one train stop out of Manhattan. You’re right next to Brooklyn,” Garner said. “You’re literally in the center of everything, but you’re away from everything at the same time.”

So for the past month, Garner, who’s 25 and works in marketing in Manhattan, has been looking at studios and one-bedroom apartments in Long Island City. And he says when he looked again today, rents had shot up. “I can’t afford it anymore,” he said. “I could barely afford it. I mean, Long Island City was already an expensive place. But now, forget about it.”

The New York City neighborhood has been undergoing a massive transformation over the past 20 years. It started out with a lot of empty lots and run-down warehouses, but now it’s full of new construction — high-rises full of luxury apartments.

The news that the online giant would be landing in Long Island City drove New Yorkers to social media to express concerns about affordable housing in the city:

Amazon is coming to Long Island city… oh you mean it’s about to be $3500 to rent in Long Island City. Heard ✌?

As a resident of Long Island City, I am outraged at Amazon’s new HQ. If I, a resident with an office job and no family am already stressed about rent, there’s no saying the impact this will have on the broader community. https://t.co/UZyvABJh2r

I live in the town/area right next to LOng Island City. With amazon coming my rent is gonna go up I’d bet.

So @Amazon decided to move it’s 2nd headquarters to Long Island City, which will now make my already high ass rent even higher. Thanks @Amazon for what you’re about to do, smh. ?? #Amazon #AmazonHQ2 #AmazonDontComeToNYC #WeDontNeedYou #AmazonSucks

Amazons HQ2 going in Long Island City is actually sad….. The way those landlords are gonna jack up rent prices.. even more.. in the surrounding neighborhoods is making me angry.

You should chat with my little brothers. They are twins that live right next to the Pepai sign. Both in media so they can probably afford the rent spike.

Real estate brokers say things might not turn out to be so bad. There are a lot of new buildings in Long Island City. And the people who move to Queens to work for Amazon aren’t all going to end up living in the neighborhood.

“I’m kind of personally more worried about my own neighborhood,” said Kyle Carscaden, a real estate broker at Spire Group who lives in Sunnyside, Long Island City’s more affordable neighbor. “I figure that people that don’t want that new construction luxury, people that want kind of the more old-school tree-lined neighborhood streets will definitely end up in Sunnyside.”

A wave of new residents could put pressure on people who’ve been living in Queens for a long time. The borough already has a shortage of affordable housing, said Bob Engel with the Free & Fair Markets Initiative.

And in New York City, there aren’t many affordable neighborhoods left.