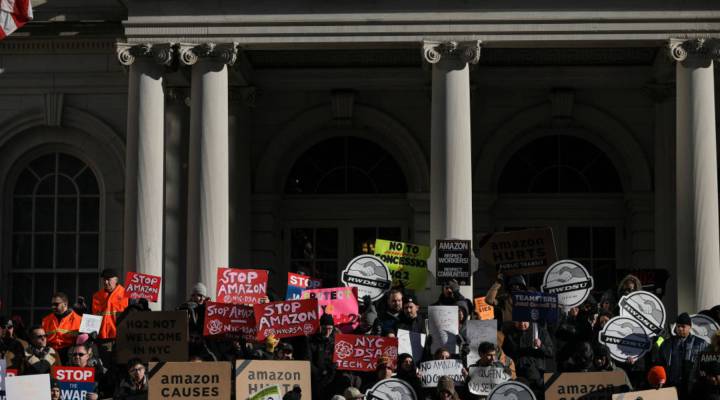 In a search that was worthy of a TV game show, Amazon held a much-publicized hunt for a second headquarters last year. It received 238 proposals from cities keen to compete for the jobs and investment that could bring. In November, the Seattle based retail giant announced it would split the prize between Long Island City, New York, and Northern Virginia. But today, in a dramatic season two opener, Amazon pulled out of New York.

Amazon claimed the plan would have brought around 25,000 jobs to the city, but it faced public protests and stiff opposition from politicians, who were unhappy about the $3 billion in tax incentives promised to one of the world’s richest companies.

Amazon explained its decision to reverse course in a blog post: “For Amazon, the commitment to build a new headquarters requires positive, collaborative relationships with state and local elected officials who will be supportive over the long-term,” it said.

“While polls show that 70 percent of New Yorkers support our plans and investment, a number of state and local politicians have made it clear that they oppose our presence and will not work with us to build the type of relationships that are required to go forward with the project we and many others envisioned in Long Island City.”

That project would have been extensive, with a new campus for up to 40,000 workers, and redevelopment of the Long Island City waterfront. Community representatives worried about the changes that would bring to the area, saying it could lead to a spike in home prices and rents.

Amazon started the hunt for a city to host HQ2 because it’s outgrowing Seattle. (According to Zillow, home prices are up 73 percent there, and rents have shot up 31 percent.) But, perhaps burned by this experience, Amazon says it’s not going to re-open the search for another base right now. It is going ahead with plans for sites in Northern Virginia, which is expected to be around the same size project as planned for New York, and also Nashville, Tennessee, where it’s building out a new operations hub, with the promise of 5,000 jobs.

Amazon has a total of 17 corporate offices and tech hubs across the U.S. and Canada already. Spreading its expansion ambitions across them may not be as flashy as opening a brand new HQ, but it may find it easier to pull off, and that its new hosts will be more welcoming to a slow-grow than to a Silicon Valley style shakeup.

As cities which tried to attract Amazon discovered, a project as large as HQ2 might bring jobs, but it also requires a commitment to building housing and other infrastructure which can quickly get expensive. When 400 politicians and businesspeople from Pittsburgh got together to draft a 300 page proposal, for example, they quickly realized the schools weren’t that great, transit needed massive investment, and the region is lacking in diversity. But the city went ahead with the bid anyway.

“We recognized that the odds were long, but we also recognized early on that there were going to be benefit to this regardless of whether we were selected or not,” David Ruppersberger, with the Pittsburgh Regional Alliance, told Marketplace in November.

Chief amongst them: having a rich set of data, which it can now use to drive improvements. Making Amazon’s shortlist has raised the profile of the city enough to attract other tech companies, which can build out smaller operations, with less disruption, than the arrival of an internet giant like Amazon.

In Virginia, officials are insisting that the new Amazon jobs must help diversify the region away from the business of government which dominates D.C. They’ve and have inserted clauses into the memorandum of understanding with Amazon which adjust the incentives the company receives to make sure that happens.

And New York isn’t going to be entirely shunned. Amazon’s blog post says its had some positive reactions, and although plans for a HQ2 there are dead, it will continue to operate and expand in the area.

“Thank you again to Governor Cuomo, Mayor de Blasio, and the many other community leaders and residents who welcomed our plans and supported us along the way. We hope to have future chances to collaborate as we continue to build our presence in New York over time.”

Click the audio player above to hear Marketplace’s Marielle Segarra speak with Marketplace host Kai Ryssdal about the story.