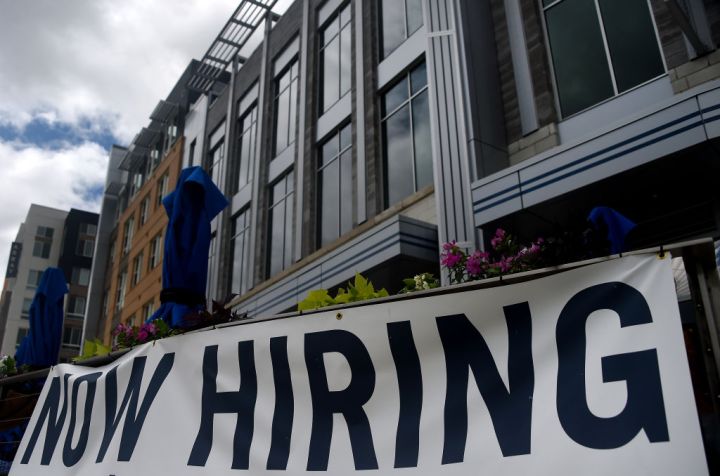 A restaurant displays a "Now Hiring" sign amid the coronavirus pandemic, on Aug. 4 in Arlington, Virginia. OLIVIER DOULIERY/AFP via Getty Images
Listen Now

The U.S. economy added a seasonally adjusted 661,000 jobs in September, the Labor Department announced Friday. The unemployment rate is down to 7.9%. That’s not bad news.

But it’s far less impressive than the gains we’ve seen in earlier months, which means that this is where the hard part starts in this recovery.

You can thank Rebecca Hamilton for some of those 661,000 jobs that were created last month. Hamilton is CEO of W.S. Badger, which makes organic skincare products and sunscreen in New Hampshire.

“We have been hiring,” she said. “The future is very uncertain, but sales continue to be very strong for us.”

“It’s really tough to be a bar owner right now. We closed our doors on March 17, and we haven’t been able to open them since,” said Zack Medford, a bar owner in Raleigh, North Carolina.

He said more and more bars are shutting down for good. Across the United States, job hiring is slowing down, and layoffs and bankruptcies are still with us.

“Businesses that initially hung on for a while are realizing they have to downsize or even capitulate,” said Seth Carpenter, chief U.S. economist at UBS.

Jason Furman, professor of economic policy at Harvard, has another concern.

“Millions of people have left the workforce,” he said.

Exactly 4.4 million have at this point in the pandemic given up looking for work, he said. This is bad, because that exodus, that form of hopelessness, is really hard to undo.

So it appears that we’ll be digging out from this for a while.