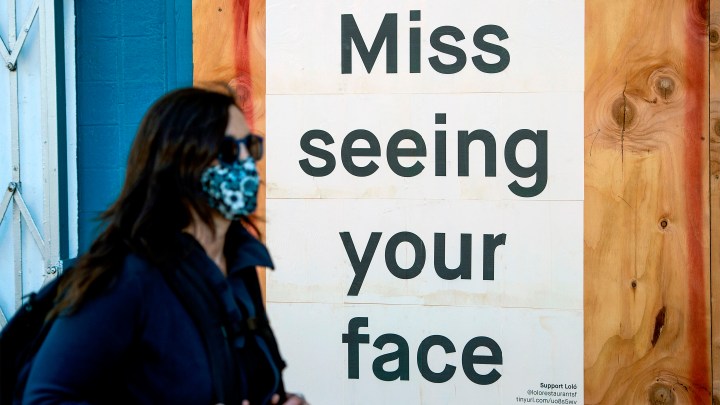 COPY
A boarded-up restaurant in San Francisco. Many layoffs that were believed to be temporary may become permanent, especially those involving higher-cost workers. Josh Edelson/AFP via Getty Images
COVID-19

A boarded-up restaurant in San Francisco. Many layoffs that were believed to be temporary may become permanent, especially those involving higher-cost workers. Josh Edelson/AFP via Getty Images
Listen Now

More than 40 million Americans have filed for unemployment since mid-March. That’s about 1 in 4 workers who had a job before the pandemic hit.

Most of those people who were laid off back in April told the Labor Department that they considered their layoffs “temporary” — that they’d been furloughed and would be back at work at some point.

But “some point” seems to be dragging on for some of them, and coming back from layoffs might not happen at all.

A lot of jobs aren’t coming back yet because a lot of businesses may never come back.

Beth Ann Bovino, chief U.S. economist at S&P Global, cites a survey by the U.S. Chamber of Commerce in April that found about a quarter of business owners worried their companies wouldn’t survive more than two months.

“That would mean that jobs that were waiting for those temporarily unemployed won’t be there,” Bovino said.

And with unemployment already in the double digits, “right now is a particularly tough time to job search because hiring has slowed across the economy overall,” said AnnElizabeth Konkel, an economist at the Indeed Hiring Lab.

Even in some formerly booming sectors.

Sanjay Khandelwal is 54 and he’s worked in high-tech finance jobs. He has two kids in college and a big Silicon Valley mortgage to cover.

“I was actually told I was going to be laid off [at the] end of February,” Khandelwal said. “I reached out very quickly to my network.”

He got one interview, then a follow-up.

“And they all seemed to go really well. And then I got email saying, hey, with everything going on, we’ve just kind of put it on hold,” he said.

“I don’t see the job market rebounding very quickly,” Khandelwal said. “As it comes back, I do think it’s going to be more difficult for experienced and more expensive workers like me.”

Meanwhile, the sectors that are hiring now are offering lower-skilled, lower-paid jobs.

“E-commerce, delivery, supermarkets — these are all industries where demand has even increased during the crisis,” said Daniel Zhao, senior economist and data scientist at Glassdoor.

Some workers are coming back from layoff as restaurants, construction sites and stores reopen.

Darius Windley was laid off in April from a restaurant in eastern Nebraska. Then, the owner got a federal Paycheck Protection Program loan and reopened.

“And so she called me. I think there was only two employees out of seven that were willing to come back, so I went back to work,” Windley said, adding that most of his former coworkers were concerned about getting sick.

And online hiring sites report that searches for jobs that can be done remotely have spiked as the pandemic has dragged on.