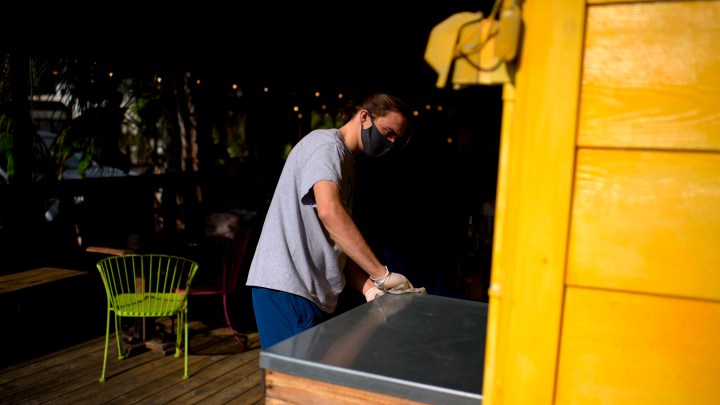 COPY
Of the companies that cut employee pay in response to the pandemic, over half of them say cuts allowed them to avoid layoffs. Mark Felix/AFP via Getty Images
COVID & Unemployment

Of the companies that cut employee pay in response to the pandemic, over half of them say cuts allowed them to avoid layoffs. Mark Felix/AFP via Getty Images
Listen Now

As bad as the pandemic job losses have been, with around 31 million Americans on unemployment rolls, it could actually have been worse. Some companies have managed to cut their labor costs to save money, without resorting to permanent layoffs — at least so far.

In a recent survey of HR managers, outplacement firm Challenger, Gray & Christmas found that 1 in 3 companies cut employee pay in response to the pandemic.

The thinking from these companies, Challenger said, is “we’ll have our team intact, it won’t hurt morale so bad by letting people go.”

Even when companies do reduce payroll, some are trying to retain ties to their workers.

Among S&P 500 companies that have cut staff, three-quarters of them have done it through temporary furloughs rather than permanent layoffs, said Ganesh Rajappan, founder and CEO of the analytics firm MyLogIQ.

“I believe it was done to retain talent,” he said.

Rajappan said among companies that did furloughs or hiring freezes, about a quarter also reduced pay for top executives — though some of those cuts have since been restored.