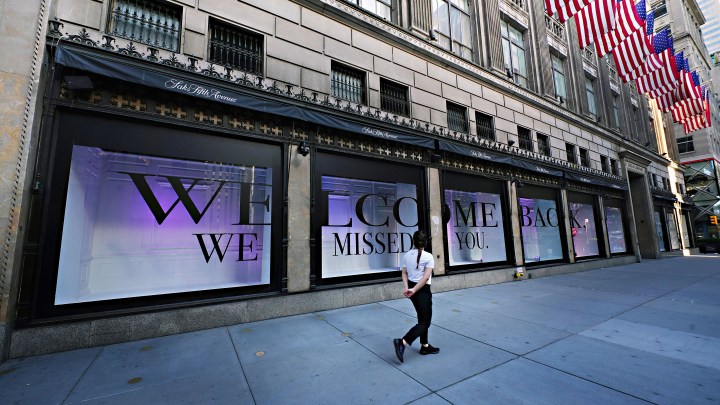 COPY
The unemployment rate has dropped to 11%. And 4.8 million more people were on American payrolls in June compared to May. Cindy Ord/Getty Images
COVID-19

The unemployment rate has dropped to 11%. And 4.8 million more people were on American payrolls in June compared to May. Cindy Ord/Getty Images
Listen Now

Employment rose by 4.8 million people in June, and the unemployment rate declined to about 11%. The numbers are better than expected, as it looks like the reopenings that really got underway in full force in late May and early June led to a lot of job callbacks.

There are still nearly 18 million people unemployed, but in June there were more than 2 million job gains in the leisure and hospitality industry, 1 1/2 million additional food service jobs (along with bar workers) and retail jobs were up by 740,000.

Of course, with the resurgence of the coronavirus and unprecedented number of infections, some states have been slowing reopenings or reversing them. On Wednesday, California ordered about 75% of the state to near shutdown, New York isn’t going to allow indoor dining at restaurants, and Texas and Florida have closed bars. Some retailers, like Apple stores in the more affected states, are closing their doors again.

In other words, these June numbers might not tell the whole story. So, are they already outdated?

“I think we’re going to see a setback in July,” said Diane Swonk, chief economist at Grant Thornton. “We could actually see the jobs numbers flatline to decline as we deal with the backtracking that has to occur as we delay reopening, and people just don’t show up. People afraid of getting infections not only stop going out to eat, but they also stop traveling, cancel vacations and stop going to doctors’ and dental offices.”

Also, getting totally accurate numbers has been tricky.

“There’s just a whole host of data collection issues, the survey response rates are very low. The way they’re collecting the data has been challenged by the shutdown,” said Julia Coronado with MacroPolicy Perspectives.

Lastly, if you look at the weekly initial jobless claims, another number that came out Thursday, it was essentially flat from the previous week — another 1.4 million new jobless claims. Employment is still many millions of jobs below its pre-pandemic level.

Why people are dropping unemployment benefits before they run out