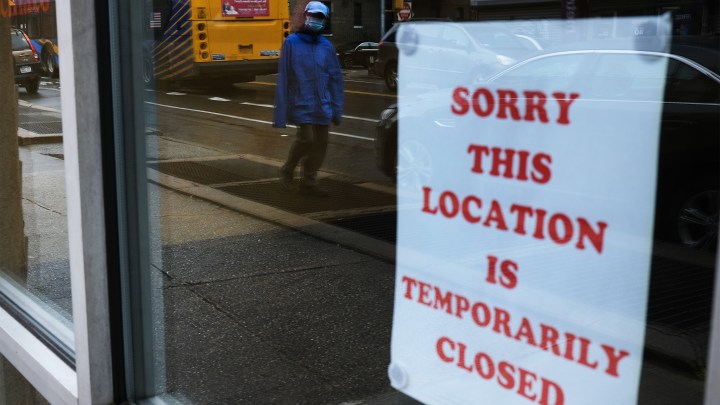 COPY
Every month a worker is on temporary unemployment, they have about a 10% to 15% chance of transitioning to a permanent separation, according to one labor economist. Spencer Platt/Getty Images
COVID & Unemployment

Every month a worker is on temporary unemployment, they have about a 10% to 15% chance of transitioning to a permanent separation, according to one labor economist. Spencer Platt/Getty Images
Listen Now

The jobs numbers we got last week for August show some people are getting back to work, with jobs like retail, leisure and hospitality seeing some of the biggest gains.

But in the last week, more and more companies in those very industries have started warning that many of their furloughed employees will turn into permanent layoffs — among them United Airlines, MGM Resorts and Bed Bath & Beyond. What does this mean for job losses as we move into fall?

Cameron Tabrizi, a preschool teacher in Seattle, was on furlough all summer. And here’s how he described his job outlook from start to finish:

“Pragmatically grim to growing into existential despair,” he said.

The pandemic dragged on, and he knew he had health issues that could prevent him from going back to work if his employer wanted him back. In August, after five months of furlough, he got the call.

“They said ‘we can either lay you off or you can come into work,'” Tabrizi said. “They gave this as a mass option to everyone that had been furloughed.”

Tabrizi took the layoff — and he was sort of prepared for it. The longer the pandemic lasted, the more he figured he would not be able to go back to work.

And this matches up with reality, according to Matt Notowidigdo, a labor economist at the University of Chicago.

“A worker that’s on temporary unemployment, every month they have about a 10 to 15% chance of transitioning to a permanent separation,” he said.

Let’s see … we’re almost entering month seven of the pandemic. So it makes sense that many furloughs are now becoming layoffs. But Heidi Shierholz, senior economist and director of policy at the Economic Policy Institute, said we’re at a new turning point. Job losses are spreading from industries decimated by lockdowns — like hospitality and tourism — and into others that weren’t initially as sensitive.

“Businesses that maybe thought they were going to be fine, unaffected by any social distancing measures are looking up and saying ‘Yeah, we didn’t have a problem then, but now we’re just seeing demand for goods and services has just been depressed,'” Shierholz said.

She said at this point in the pandemic, minimizing job loss is about boosting spending — something that became more difficult for families once that extra $600-a-week in unemployment benefits went away.