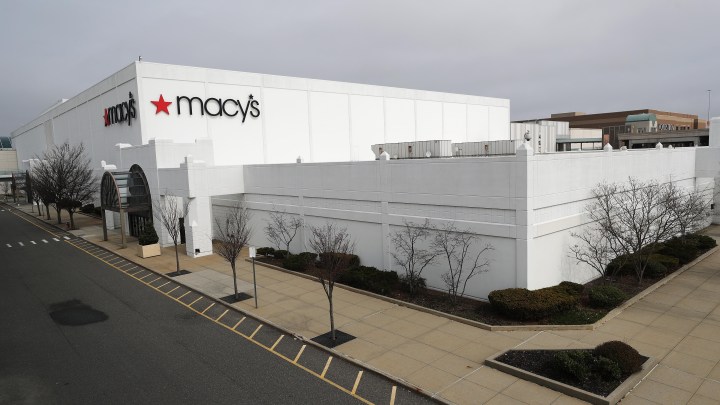 COPY
While brick-and-mortar stores are closed, a lot of big retailers are trying to sell this season’s clothes at a discount online. Al Bello/Getty Images
COVID-19

While brick-and-mortar stores are closed, a lot of big retailers are trying to sell this season’s clothes at a discount online. Al Bello/Getty Images
Listen Now

Macy’s is telling the majority of its 125,000 employees that they’ll be furloughed, starting as soon as this week, because of the COVID-19 pandemic.

All of the company’s 775 locations, including Bloomingdale’s and Bluemercury beauty stores, have been closed since March 18, with no opening date in sight.

Macy’s says it’s already done what it can financially, like drawing from its line of credit and suspending dividend payments. Now it has to reduce its workforce.

Joel Bines, managing director at AlixPartners, says we should expect other department stores to follow suit, and also ask for rent deferrals, as we roll over into a new month and payments are due.

“This is the week that we’ll begin to see some of those announcements start to come out, either formally or informally,” Bines said.

The digital side of Macy’s business will remain open, including its distribution and call centers. Denise Dahlhoff, senior researcher at The Conference Board, says a lot of big retailers are already trying to sell this season’s clothes at a discount online.

“Much of the merchandise is sitting in stores now, so when stores reopen there will be older merchandise that retailers want to clear,” Dahlhoff said.

Macy’s says its furloughed employees will get health insurance through May, and it hopes to bring people back on a staggered basis as soon as it’s able to resume business.