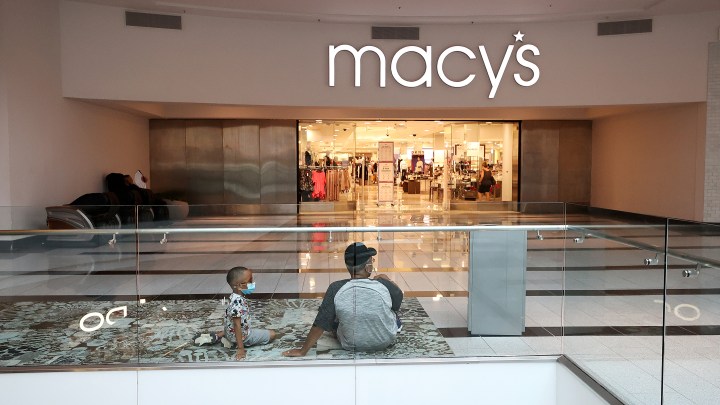 COPY
When malls start to lose retailers, it hurts all of the other tenants still there like movie theaters, restaurants and more. Al Bello/Getty Images
COVID-19

When malls start to lose retailers, it hurts all of the other tenants still there like movie theaters, restaurants and more. Al Bello/Getty Images
Listen Now

Macy’s usually posts its second quarter results around this time in August, but the retailer told Marketplace it’s now putting that off until early September, due to the disruptions of the pandemic. Anchors of big malls, including Macy’s, J.C. Penney and Kohl’s, were in shaky positions even before COVID-19. But it isn’t just the anchor stores that are struggling.

Traditionally the mall experience has been about more than shopping at big department stores. There are movie theaters, food courts and cosmetics stores that offer makeovers, for example.

Right now, people aren’t doing much of that, and with other mall retailers starting to close, “it really hurts the remaining tenants that are still there,” said analyst Nick Shields with Third Bridge. “Both from a foot traffic perspective, also from a competitive positioning perspective.”

Even before COVID-19, malls were trying to adapt to people buying more online.

“We’re seeing, in a few months, adoption of e-commerce behaviors that we didn’t expect to see for a few years from now,” said Barbara Kahn, professor of marketing at The Wharton School of the University of Pennsylvania.

And, as malls start to lose retail tenants, “for other retailers, they’re not going to want to expand into malls where there are quite a lot of vacancies, because there’s not much there for them either,” Shields said.

If vacancy rates increase, Shields said mall owners may have to lower rents.