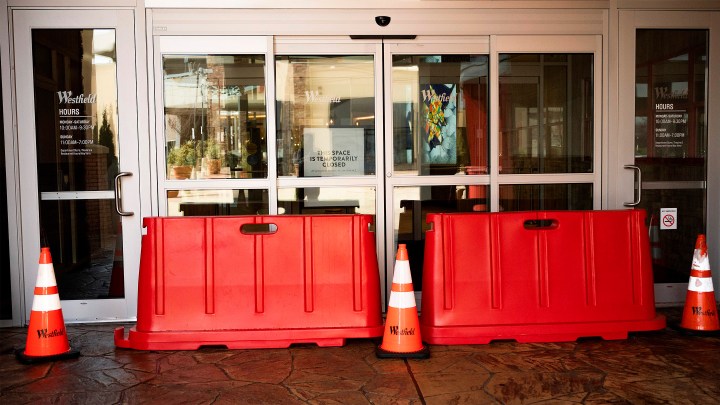 COPY
The Westfield Annapolis Mall is barricaded and closed in Annapolis, Maryland, in March. Jim Watson/AFP via Getty Images
COVID-19

The Westfield Annapolis Mall is barricaded and closed in Annapolis, Maryland, in March. Jim Watson/AFP via Getty Images
Listen Now

We’ve seen the impact the coronavirus outbreak has had on retailers — business is way down. That’s especially true at department stores like Macy’s, Neiman Marcus and J.C. Penney. Now a report by Green Street Advisors predicts more than half of department stores located in U.S. malls will close by the end of 2021. And that could have a domino effect.

Malls are typically built around anchor stores that occupy multiple floors and tens of thousands of square feet. All the smaller stores in between that sell clothing or jewelry or hot pretzels rely on those anchors to bring in customers.

“When an anchor goes dark, the specialty stores that occupy the concourse leading to the department store anchor struggle because the traffic is vastly diminished,” said Mark A. Cohen, who directs the retail studies program at Columbia Business School.

Which is why, he said, these smaller stores often have clauses in their leases that allow them to pay lower rent if an anchor store shuts down.

Cohen paints a grim picture of what can happen next.

“Malls that have been suffering from this phenomenon start to invest less in housekeeping and in security,” he said. “Parking lots are not as pristine. The mall becomes less attractive as a destination.”

He expects a lot of malls to close because of this crisis.

But department stores have been struggling for years, and some malls have found creative replacements for them.

Now we may also see malls become “service centers, where anchor stores are replaced with fitness or beauty or restaurants or even medical providers that are more on the service side than on the product side,” said Barbara Stewart, who teaches retailing and consumer sciences at the University of Houston.

The problem is, these kinds of businesses might not be looking to open a new location anytime soon.