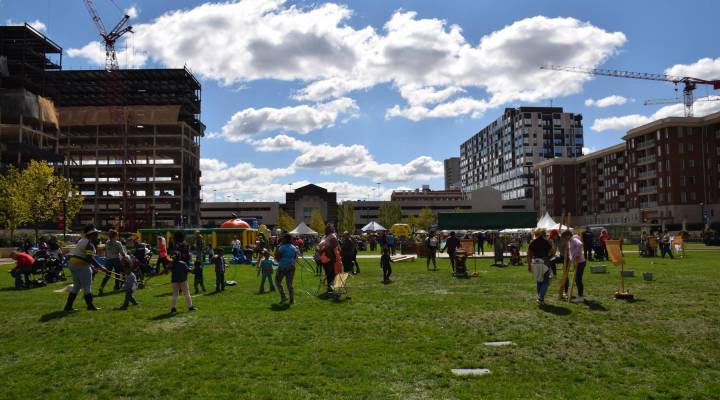 It’s officially fall in Columbus, Ohio. I know this because there are children with painted faces bouncing around inside a giant inflatable pumpkin at a harvest fair in a downtown park called Columbus Commons.

Nearby, Christopher Patterson is tossing a beanbag, while his 3-year-old daughter runs around on the grass. Patterson recalls a time you wouldn’t bring a toddler to this particular spot. “I remember it being like a lot of crime and just kids hanging out being kids, mischief,” Patterson said. “It’s turned into a really nice place.”

Ten years ago, the park was a nearly abandoned, three-story mall called City Center. It opened in 1989, with nearly 150 stores. But like a lot of urban malls, it lost shoppers to the suburbs. It also got a reputation for crime; in 1994, a teenager riding an escalator at the mall was killed in a gang-related shooting. By 2009, City Center had only eight stores left.

“You’d walk through the mall and you could hear your footsteps echo,” said Michael Coleman, who was mayor of Columbus at the time. There were blocks of boarded-up buildings and empty parking lots around the mall, he said. “It was dragging down downtown in a big way,” Coleman said.

Capitol South, a nonprofit development corporation created by the city, took over the property and started looking at redevelopment plans. The group considered turning the mall into an office building or a medical-research center. “Each one of the plans that we looked at either financially didn’t pencil out, or from a constructability point of view, it simply couldn’t be done,” said Guy Worley, CEO of Capitol South.

Instead, Capitol South decided to knock down the mall and build a park. The group was inspired by similar projects, like Bryant Park in New York City — a 9.6-acre green space next to the New York Public Library. The park had become a dead zone, known for drug deals and prostitution, until a local group fixed it up in the 1980s, adding a café and entertainment. The revitalization effort boosted rents nearby.

A big lesson, said Worley, is that on its own, creating a green space isn’t enough. You needed to bring people there. So Columbus Commons has an outdoor stage and a café, and it hosts more than 200 events a year — many of them free — like yoga classes and concerts.

The plan seems to be working. There has been about $400 million of private investment around Columbus Commons since it opened in 2011, buildings with office space, apartments, and ironically, new retailers.

Frank Sasso, the CFO of Kaufman Development, is giving me a tour of one of the new buildings on the park, a $52 million, 12-story high-rise, with 121 apartments, all of which rented before construction on the building was even finished.

“Would you have built the building before when there was just a mall there?” I asked him.

“We most certainly would not have,” Sasso said. “No. The park was a big, big piece for us.”

Critics have said Columbus Commons helped drive up rents and made downtown less affordable. Rents have gone up between 3 to 3.5 percent annually for several years, according to data from Vogt Strategic Insights, a real-estate research firm based in Columbus. The rising rents leaves little affordable housing for the people who work in service-sector jobs in the new buildings downtown, said Rob Vogt, a partner at the firm.

“The service industry is rather significant downtown, and you know, everyone has to basically commute into downtown because they simply can’t afford those rents when they work at some of those lower or modest income jobs that are there,” Vogt said.

But Sasso said the park has revived the area.

Ten years ago, about 5,000 people lived downtown, according to the Columbus Downtown Development Corporation, a partner organization with Capitol South. Now, more than 8,000 do. “Someone told me the other day — he was a lifelong Columbus resident — that at 5:05 p.m. you could shoot a cannon on Broad and High and not hit anyone because it was that dead after work hours,” Sasso said.

The hope, she said, is when people do show up to the park for their yoga class, they’ll do some shopping too.