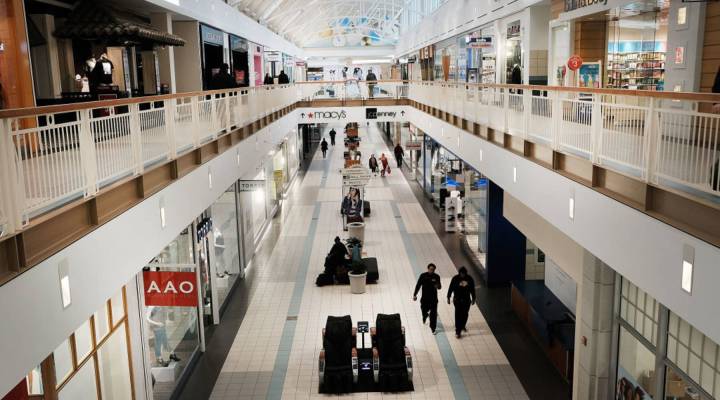 COPY
A recent Credit Suisse report estimates that about 1 in 4 U.S. malls will shut down in the next five years. Above, people walk through a nearly empty shopping mall in Waterbury, Connecticut. Spencer Platt/Getty Images

A recent Credit Suisse report estimates that about 1 in 4 U.S. malls will shut down in the next five years. Above, people walk through a nearly empty shopping mall in Waterbury, Connecticut. Spencer Platt/Getty Images
Listen Now

After more than 20 years, Jim Quigley left his job at a Wall Street investment firm for a smaller market. He got elected town supervisor in Ulster, New York, about 100 miles north of Manhattan. Population: 12,251.

“My family’s been in this community since 1849,” Quigley said.

These days, Quigley is working 60-hour weeks, trying to keep the town’s budget in the black. He’s been preparing for a drop in tax dollars from Ulster’s largest taxpayer, the Hudson Valley Mall.

About two years ago, one of the mall’s anchor stores, JCPenney, closed. Macy’s followed. Then the smaller apparel stores and mom-and-pops started to disappear. In 2015, the mall’s owner defaulted on its debt and the bank later took over.

In 2009, the property was valued at $135 million. The bank sold it in 2017 for just over $8 million. Now the new owner, Hull Property Group, based in Augusta, Georgia, which didn’t respond to requests for comment, is asking the town to lower its tax bill.

Quigley said the mall could end up paying about a quarter of a million dollars less in taxes in 2018.

In some cities, that would be a rounding error. But in Ulster, that amount represents about 6 percent of the town’s total tax revenue. The money helps pay for basic services like sewers, roads and the fire department.

He said the town has two options: raise taxes or cut costs.

One store closure after another

It seems like every time you turn around, another retailer announces that it’s shutting down stores: JCPenney, Sears, Payless, Michael Kors, Ann Taylor — brands you’d find at your local shopping mall.

There are many reasons the stores are struggling. Online retail plays a role. In some towns, like Ulster, demographics do, too.

Ulster used to be a company town. In the 1950s, IBM opened a campus there, where more than 7,000 workers built computer systems for things like missile defense and aircraft control. The Hudson Valley Mall opened in the ’80s, when times were good. Then the computer giant restructured its business.

“When IBM left in the mid-’90s, it left a gigantic hole in our community,” Quigley said.

The youngest workers transferred. The older ones retired early. Now, 43 percent of Ulster’s residents are age 50 or older, and they don’t have a lot of disposable income to shop.

That’s clear when we get to the Hudson Valley Mall. It doesn’t look run down. The lights are working. The floors are clean. On a weekday afternoon, there are people walking around. But about 40 percent of the stores are vacant.

Many of the now-closed stores, like American Eagle and Hollister, catered to teenagers.

“It’s quite problematic for a retailer to succeed when there’s no customers,” Quigley said.

What some customers want is changing, too. And while that hurts places like Ulster that depend on a mall, it’s helping other cities and towns.

Kingston, New York, is just a 10-minute drive from the mall. On a weekday afternoon, the city’s main drag is buzzing with people. They’re ducking into shops and eating at cafes that serve vegan milkshakes and quinoa with edible flowers.

People are also spending more money on experiences, like eating at restaurants, and less on clothes.

Volpe said there used to be a lot of empty stores in this part of Kingston. Not anymore. And he doesn’t think much of the Hudson Valley Mall.

“The mall is basically dead at this point,” he said.

A recent Credit Suisse report estimates that about one in four U.S. malls will shut down during the next five years.

That can be the beginning of a downward spiral for towns, said Thad Calabrese, associate professor at the New York University Wagner Graduate School of Public Service.

“When you have large, blighted properties, which empty malls are, it does not telegraph that this is a municipality that is thriving, growing and the place you want to do business,” Calabrese said. “It gives quite the opposite, that it’s a city in decline.”

“Most studies have found that the malls have a positive impact on residential property,” said Lucy Dadayan, senior research scientist at the Rockefeller Institute of Government. “The reverse is true as well.”

And if a mall stays vacant for a long time, the local government can end up paying to maintain the property’s lighting, electricity, roads, water lines and other infrastructure.

“They may have to take on some of these costs that used to be paid by the owner or the tenants of the mall,” said NYU’s Calabrese.

In Ulster, the Hudson Valley Mall’s new owner has told local media that it plans to turn the property around by attracting national brands with cheap rent. Jim Quigley, the town supervisor, hopes that works. He has roads to pave.