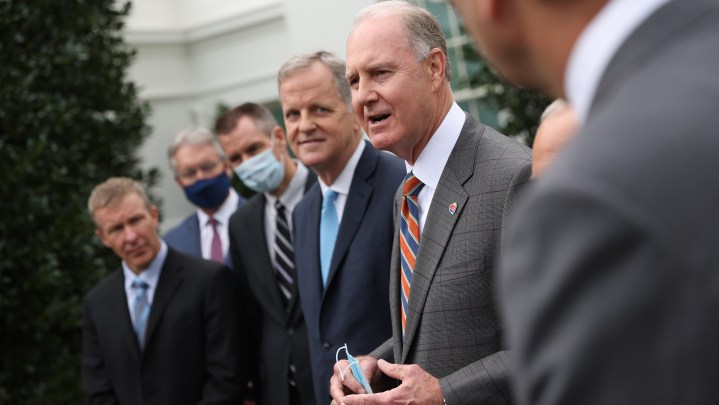 COPY
Southwest Airlines Chairman and CEO Gary Kelly, center, speaks with other airline executives after a meeting at the White House regarding an extension of federal aid on Sept. 17. Win McNamee/Getty Images
COVID-19

Southwest Airlines Chairman and CEO Gary Kelly, center, speaks with other airline executives after a meeting at the White House regarding an extension of federal aid on Sept. 17. Win McNamee/Getty Images
Listen Now

The companies and their labor unions are pressing for another round of $25 billion in federal aid to help them get through another six months of the pandemic, which has caused air travel to plummet. They say it’s the way to avoid tens of thousands of layoffs across the industry.

As air travel plummeted in the spring, the airline industry got $25 billion in federal aid. And there was a big string attached: no involuntary furloughs or layoffs of airline employees.

The airlines did offer voluntary furloughs, buyouts and early retirements to cut labor costs. The workforce is down roughly 20%, according to figures from the Bureau of Labor Statistics.

“But that’s nowhere near the 70% reduction in passenger volumes. They’re not doing enough flying to actually support their current headcounts,” said Colin Scarola, equity analyst at CFRA Research. He estimates airlines could lay off as many as 50,000 employees starting in October.

The companies say another round of relief money could prevent layoffs.

But Madhu Unnikrishnan at Airline Weekly says the airlines don’t have enough revenue to keep all those employees around in the long run. Business travel is down more than 90%.

“And then also international travel is almost gone and probably not coming back anytime soon,” Unnikrishnan said.

In the meantime, the airlines are cutting routes and borrowing to stay financially aloft.