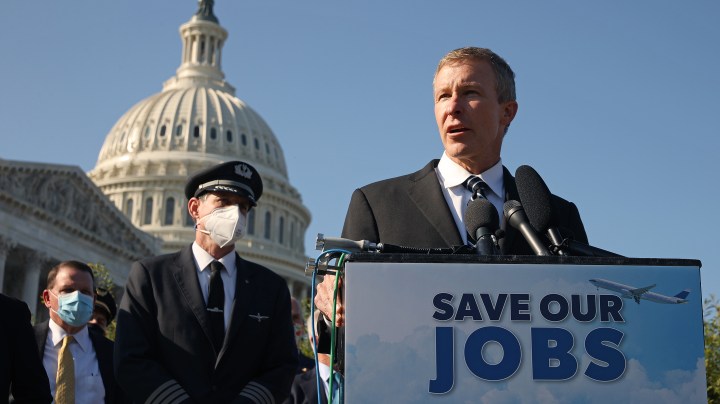 Airline CEOs and union leaders this week beseeched Congress for an extension of the Payroll Support Program — part of the CARES Act that amounted to a $25 billion industry bailout.

The funding was supposed to help airlines maintain their payrolls until travel demand returned, but that’s not happening fast enough.

Now the industry is warning of a massive wave of layoffs if lawmakers don’t extend funding before Oct. 1.

According to the trade group Airlines for America, passenger volume is off about 65% from a year ago. And airlines are collectively burning through $5 billion each month.

CEO Nick Calio said airlines are asking for a six-month extension “because hopefully by then we will be over the hump. And we will start to have a pickup in travel by next spring.”

The conditions of the previous bailout protected workers until Oct. 1.

Calio warned that up to 100,000 airline employees could soon join the ranks of the unemployed.

And Robert W. Mann, a former airline executive and industry consultant, said a second bailout would help the U.S. economy recover faster when the pandemic wanes.

When, exactly, we get to the other side of the pandemic is still murky.

“This is just postponing the inevitable,” she said. “As long as the demand doesn’t go back up, this is just basically a Band-Aid patch.”

She said bankruptcy would be the best option. Airlines have shown they can emerge from restructuring healthier. And she said that means troubled airlines don’t pose a major risk to the economy at large.