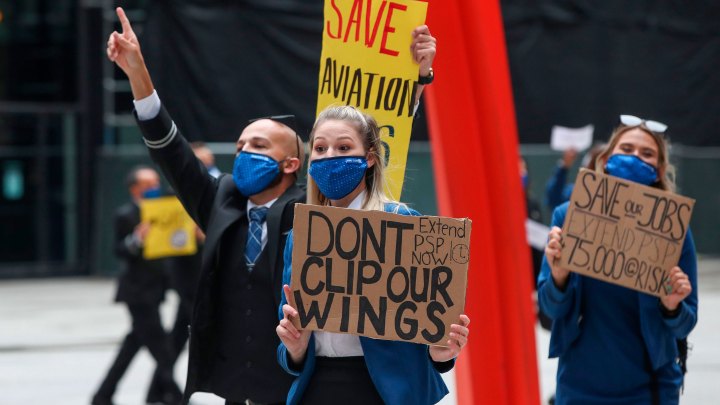 After abruptly shutting down negotiations Tuesday over the next COVID-19 relief package, President Donald Trump backtracked saying maybe some direct aid to households will happen.

He also singled out airlines for some additional aid.

He said he wants Congress to pass a $25 billion aid package for the airlines, and that’s on top of the $25 billion that’s already expired.

Airlines are suffering in this pandemic, no question. But a lot of industries are struggling. So why are airlines special?

For one, airlines are a big industry. They generate almost $2 trillion in economic activity; they employ around 450,000 people, which is indirectly tied to 10 million more jobs.

“If we are going to jumpstart the economy, the country needs to be able to move people and goods,” said William Swelbar, a research engineer at the Massachusetts Institute of Technology’s International Center for Air Transportation. It’s a case that’s convinced lawmakers at least once this pandemic. But among critical industries, airlines also have unique clout.

“They provide service to just about every congressman’s jurisdiction,” said Richard Squire, professor of law at Fordham University. “They are able to threaten to deny service or terminate service to smaller airports.”

In fact, one of the conditions of the first airline relief package was that service not be interrupted to a long list of airports. Squire said it meant some flights flew empty, or nearly so. Airlines also spend heavily in Washington, D.C., with the hope of preserving a special status.

“Last year, the U.S. airlines spent over $100 million on lobbying,” said Samuel Engel, senior vice president with consulting firm ICF. He said that was ramped up this year.

Airline employees wield influence, too, according to Tom Kochan, professor of management at MIT’s Sloan School of Management. That’s because they are heavily unionized.

“The unions join the companies in promoting and lobbying for support as well,” he said.

It’s worth pointing out, too, the government has a long history of supporting airlines. The government set prices and routes before 1978, and it was part of the Federal Aviation Administration’s mandate to promote airlines up until the 1990s.