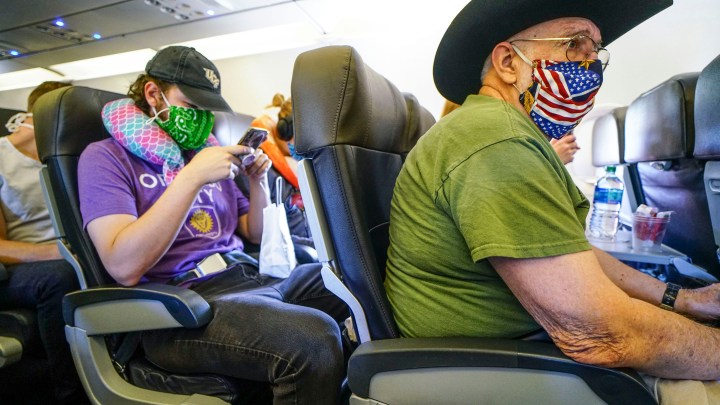 COPY
The numbers show that only about half a million Americans are flying every day. That’s one-fifth the normal amount for the early summer. Sandy Huffaker/Getty Images
COVID-19

The numbers show that only about half a million Americans are flying every day. That’s one-fifth the normal amount for the early summer. Sandy Huffaker/Getty Images
Listen Now

Airlines executives are going to the White House on Friday. On the agenda, reportedly: coronavirus issues including checking passengers’ temperatures and contact tracing concerns.

It comes at a time when airline workers are pleading for more government help.

Sabri Ben-Achour: What have the airlines been doing to coax back flyers and keep them safe?

Scott Tong: The big airlines say they’re screening passenger temperatures now, and reports suggest they’ll ask the government to mandate that. They require masks from check-in all the way to arrival. But the numbers show that only about half a million Americans are flying every day. That’s one-fifth the normal amount for the early summer. So, by the numbers this is one of the worst downturns ever for this industry.

Ben-Achour: The airlines have already received some $25 billion in relief money. Are they asking for more?

Tong: The airlines aren’t. As you mentioned, they got $25 billion in the Coronavirus Aid, Relief and Economic Security Act, and in return promised not to lay people off, through September. Who knows if things will recover then?

The unions representing air industry workers are asking for another $25 billion to guarantee jobs after the money ends on Sept. 30. And pilots for American Airlines want the government to purchase all the middle seats, to space people out. We should say, the airlines are offering voluntary buyouts to their workers.

I just spoke to James Carlson, a spokesman at the International Association of Machinists and Aerospace Workers. He says their members already are taking voluntary leaves and work reductions:

“The airline workers have stepped up and helped out their companies. And we just want to see this through and do the things that are smart. Because if we just take a hands-off approach to this, we will have a much worse situation on our hands on Oct. 1.”

Ben-Achour: Is bailing out airlines considered a good use of the public’s money?

Tong: Every industry calls itself critical. Last month a group of brand-name economists pushed a working paper on COVID-19 recovery packages. They found, long-term, the best bang for your buck is investing in health care, infrastructure and research. Airlines were one of the worst performers.