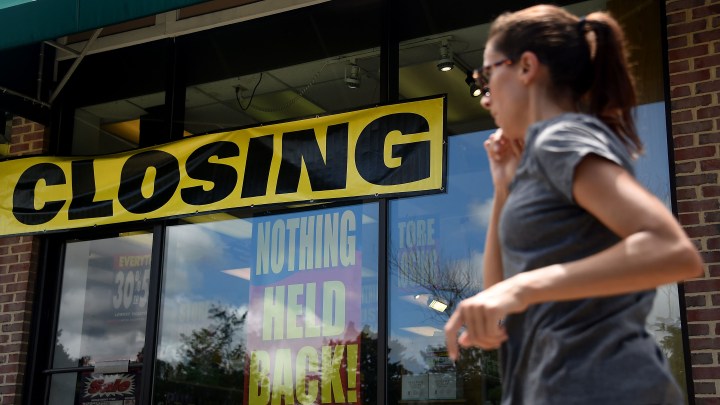 The September jobs report coincides with other data that suggests that while the economic picture may be improving, the gains have slowed since summer. Olivier Douliery/AFP via Getty Images
COVID & Unemployment

The September jobs report coincides with other data that suggests that while the economic picture may be improving, the gains have slowed since summer. Olivier Douliery/AFP via Getty Images

America’s employers added 661,000 jobs in September, the third straight month of slower hiring and evidence from the final jobs report before the presidential election that the economic recovery has weakened.

With September’s hiring gain, the economy has recovered only slightly more than half the 22 million jobs that were wiped out by the viral pandemic. The roughly 10 million jobs that remain lost exceed the number that the nation shed during the entire 2008-2009 Great Recession.

The unemployment rate for September fell to 7.9%, down from 8.4% in August, the Labor Department said Friday. Since April, the jobless rate has tumbled from a peak of 14.7%.

The September jobs report coincides with other data that suggests that while the economic picture may be improving, the gains have slowed since summer. The economy is under pressure from a range of threats. They include the expiration of federal aid programs that had fueled rehiring and sustained the economy — from a $600-a-week benefit for the unemployed to $500 billion in forgivable short-term loans to small businesses.

Friday’s data offers voters a final look at the most important barometer of the U.S. economy before the Nov. 3 presidential election — an election whose outcome was thrown into deeper uncertainty by the announcement early Friday that President Donald Trump has tested positive for the coronavirus.

The rise in confirmed viral cases that is occurring in much of the country could force new business shutdowns or discourage consumers from traveling, shopping or visiting restaurants. A recent wave of layoffs by large companies has heightened fears that the viral outbreak still poses a serious threat to the economy.

Disney said this week that it’s cutting 28,000 jobs, a consequence of reduced customer traffic and capacity limits at Disney World in Florida and the ongoing closure of Disneyland in California.

Allstate said it will shed 3,800 jobs, or 7.5% of its workforce. Marathon Petroleum, the Ohio refiner, is slashing 2,000 jobs. And tens of thousands of airline workers are losing their jobs this month as federal aid to the airlines expires. The airlines had been barred from cutting jobs as long as they were receiving the government assistance.

The United States is hardly alone in struggling with a weakened job market. Unemployment has risen for a fifth straight month in Europe in August and is expected to grow further amid concern that government support programs won’t be able keep many businesses hit by coronavirus restrictions afloat indefinitely.

So far, U.S. hiring has rebounded quickly compared with previous recessions. The gains have mainly reflected millions of temporarily laid-off Americans who were called back to work when retailers, restaurants, medical offices and other businesses reopened, at least partly, from their pandemic-induced shutdowns.

Yet the number of people seeking unemployment aid, reflecting the pace of layoffs, remains unusually elevated, with 837,000 jobless claims filed last week. That’s about 35,000 lower than the previous week but still historically high.

Until a vaccine is developed, many economists say that hiring and economic growth won’t fully recover. Restaurants, for example, rehired many employees over the summer as outdoor dining picked up. But as temperatures cool, business may fall off again, which could force many restaurants to lay off workers again. One in six restaurants have shut down because of the viral pandemic, the National Restaurant Association says.

Slowing job growth has raised the specter of a prolonged downturn that feeds on itself and becomes harder to fully reverse. Many temporary layoffs are becoming permanent as hotels, restaurants, airlines, retailers, entertainment venues and other employers anticipate a longer slump than they initially expected. There is also growing fear of a resurgence of the virus, which would compound the threat.

The longer that laid-off workers fail to find jobs, the more likely it is that they will have to look for new work with new employers or in different occupations.

Doing so can require additional training or education and take much longer to achieve than just returning to a previous job. The delay in landing a new job also erodes spending among the longer-term unemployed. A blow to consumer spending can force further job cuts as other businesses see their revenue decline and are forced to retrench.

Americans’ incomes slipped in August, the first decline since the depths of the pandemic in early spring. A sharp fall in government support payments offset a rise in wages and salaries earned by newly rehired workers.