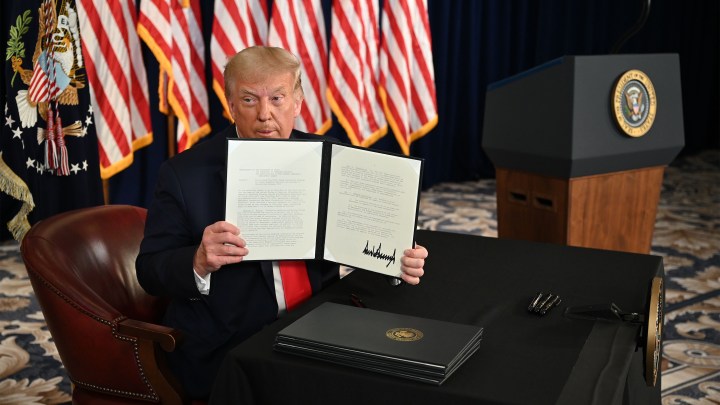 President Donald Trump signed one executive order and three memorandums this past weekend after negotiations on another economic support plan on Capitol Hill collapsed.

Whether the president can actually do most of what he did depends on whom you talk to. So rather than engage in that particular back and forth, we’ll focus on the thing he did that he can do: deferring collection of payroll taxes.

Specifically, that means pausing taxes on the employee portion of Social Security, 6.2% per paycheck. It starts Sept. 1 and goes through the end of the year, but only for people making less than about $100,000 a year.

Starting with this: What happens come January when employee payroll taxes that weren’t collected come due?

“Nobody knows how the repayment part will have to be restructured,” MacGuineas said. “It’s going to complicate the life of employers tremendously — if they have to be responsible for making sure that money gets paid back.”

The president has instructed the Treasury secretary to explore options including legislation to forgive those payroll taxes altogether.

Pete Isberg, vice president of government affairs at payroll processor ADP, said it’s going to be really complicated for employers to alter payroll tax collection midyear for only some employees based on a salary threshold.

“Programming changes of this magnitude normally require, like, six months to do,” Isberg said. “Obviously, it can be done sort of on an emergency basis, but it may be problematic.”

He said employers could be liable for not withholding enough tax and underpaying the Treasury.

Randy Dellwo, who owns a business that makes scientific instruments in Bend, Oregon, talked with his 10 employees at a Zoom meeting Monday morning.

“The consensus is that everyone would rather not defer their payroll taxes,” he said. “For one thing, they would need to save the money, so they’d have it available to pay back at the end of the year.”

The Committee for a Responsible Federal Budget estimates temporary payroll tax deferment could leave U.S. workers with as much $100 billion of extra pay through December. But if a lot of businesses and employees follow the lead of Dellwo’s company, the impact will be more muted.