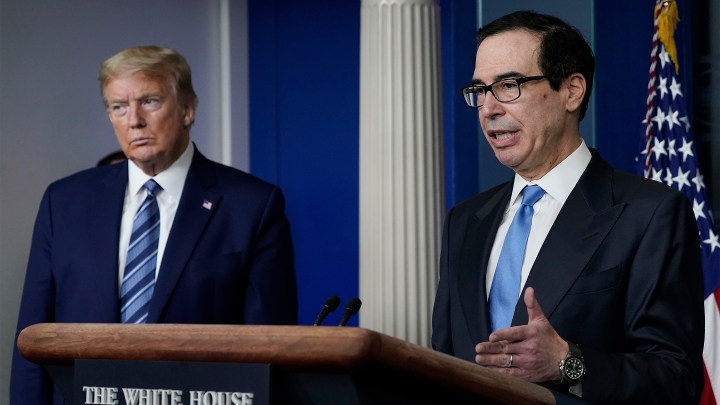 The Department of the Treasury and the IRS issued guidance Friday for how to implement that payroll tax deferral President Donald Trump announced earlier this month.

A payroll tax deferral means nothing for the tens of millions of people out of work because they have no paycheck and therefore no payroll tax to be deferred.

Also, this deferral is supposed to kick in Sept. 1, which is going to be a challenge, to put it nicely, for the businesses and payroll processors that got this news Friday.

The “deferral” part of the payroll tax deferral means this may not be quite the tax break many folks were hoping for.

The president’s move doesn’t so much change what people pay in taxes —just when they pay it. So workers might get a small pay bump for a few months.

But, said Janet Holtzblatt at the Tax Policy Center, come Jan. 1, “they should know that the money is going to start being repaid around a time that the Christmas bills also come due.” That will be in addition to payroll taxes that restart then.

That is giving businesses some pause before getting on board.

“I think it’s very difficult for widespread adoption, absent Congress and acting to provide greater clarity and to forgive the deferred taxes,”said Neil Bradley, chief policy officer at the U.S Chamber of Commerce.

A lot is still unclear about this policy, he said, like what happens if someone changes jobs during the deferral period or is laid off.

“How do you reconcile between employers? You have substantial record-keeping issues,” Bradley said.

All this leaves business owners in a bit of a bind.

Davis Senseman, a lawyer in Minnesota, has been getting a lot of questions from small business owners.

“A lot of them are saying, ‘if I don’t do this, like, how do I talk to my employees about it, so they don’t think that somehow they’re, you know, getting ripped off?” Senseman said.

And as far as Senseman’s business, “I pay myself as an employee … I use a payroll service, and I am not going to change anything.”

The payroll tax deferral technically kicks in Tuesday, but it will probably take any businesses that do participate at least a couple of weeks to get their systems up to speed.