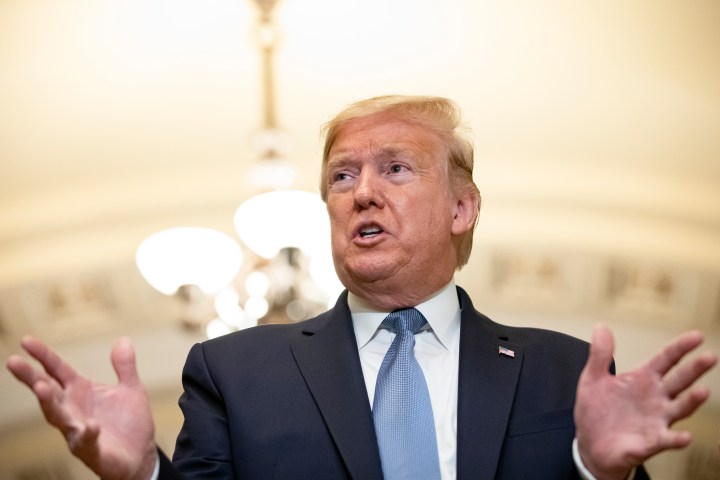 COPY
President Donald Trump talks to reporters about the spread of the coronavirus, the state of the economy and the market's reaction to the outbreak. Samuel Corum/Getty Images
COVID-19

President Donald Trump talks to reporters about the spread of the coronavirus, the state of the economy and the market's reaction to the outbreak. Samuel Corum/Getty Images
Listen Now

President Trump says his administration is working on a stimulus plan designed to curb the potential economic downturn caused by the COVID-19 outbreak. Among the proposals is a payroll tax cut.

In the U.S., employers are required to pay a portion of each employee’s salary in taxes. According to the Tax Policy Center, the U.S. collected $1.1 trillion dollars in payroll taxes in 2017, financing social security, the hospital insurance portion of Medicare, and the federal unemployment insurance program.

The idea of a payroll tax cut is to boost the economy by getting “a lot of money in a lot of people’s pockets quickly,” said Tara Sinclair, professor of economics at The George Washington University. But that isn’t the case for many consumers.

“They don’t even necessarily notice that additional money because it’s a relatively small proportion of their paycheck,” Sinclair said.

In 2011, President Barack Obama cut payroll taxes by 2%, which averaged around $1,000 extra per family that year. For the Bush administration’s stimulus plan, checks were sent to taxpayers.

“People aren’t going to restaurants and are cutting back on seeing movies and not going to the bowling alley as often, not because of a financial constraint. It’s a public health one,” Kaeding said.

Due to social distancing and cancelled public events, many businesses will face a decrease in demand. But payroll tax cuts only help those who get a paycheck. Retirees, the unemployed and many gig workers would be left out of this stimulus measure.