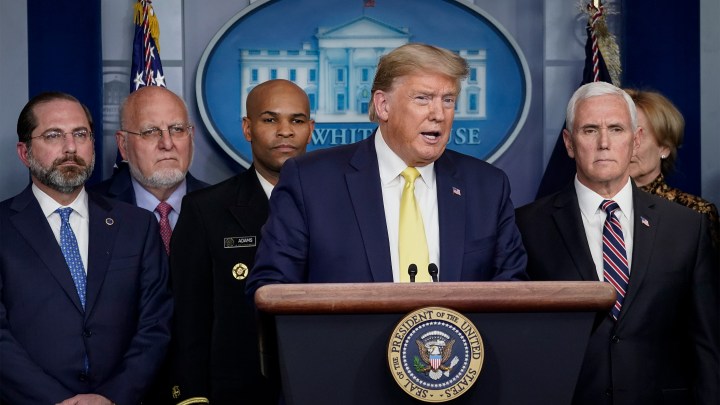 COPY
President Donald Trump has suggested a payroll tax cut to help with the economic slowdown caused by the spread of COVID-19. Drew Angerer/Getty Images
COVID-19

President Donald Trump has suggested a payroll tax cut to help with the economic slowdown caused by the spread of COVID-19. Drew Angerer/Getty Images
Listen Now

This would be a cut in the taxes used to fund programs like Social Security and Medicare. The Obama administration used a similar cut during the Great Recession to try to spur consumer spending.

But don’t compare the coronavirus economy to the Great Recession, said Alan Auerbach, an economics professor at the University of California, Berkeley, because they weren’t caused by the same factors.

The current slowdown is being caused by a disease that’s keeping more and more people at home, away from work and public gatherings. And no one knows when it will stop.

“There’s not much you can do to restore demand for the industries being directly hit,” Auerbach said.

Extra cash probably won’t get people to take cruises, buy plane tickets or go to concerts. They might save it or use it to stock up on supplies.

Plus, the only people who would benefit from a payroll tax cut are people on payrolls.

“People who are at most risk here economically are the people who would benefit the least,” said Howard Gleckman, a senior fellow in Urban-Brookings Tax Policy Center. A payroll tax cut wouldn’t help people who have been laid off or people without paid leave who are sick or quarantined.