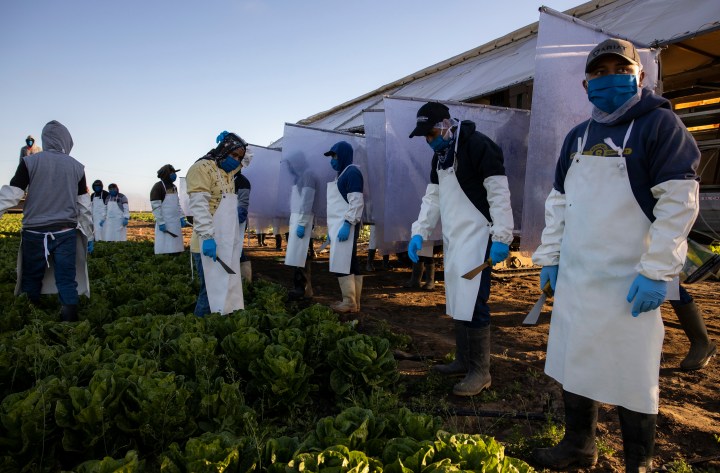 Nearly half of all Americans would have trouble paying for an unexpected $250 bill and a third of Americans have less income than before the pandemic, according to the latest results of our Marketplace-Edison Research Poll.

Our latest survey looked at how Americans have been faring financially about six months into the pandemic, race and equity within the workplace, and some of the key issues Trump and Biden supporters are concerned about.

The ongoing Marketplace-Edison Research Poll, which launched in September 2015, also includes an Economic Anxiety Index® that reveals how people feel about their personal financial situation. The higher that number, the more stressed they feel.

Since the COVID-19 pandemic started, the Anxiety Index has almost reached its highest-recorded level, ticking up to 35 in May of this year and 34 in October. In May 2019, it was at a record low of 28, showing how drastically the crisis has affected our sense of financial security in just the span of a year. The only other time the index has been higher was in October 2016, our last election cycle, when it reached 36.

“I think we just have big differences between how people see the last several years vs. how they see the last several months. As we picked up in May, it seems to really be continuing,” said Larry Rosin, president and co-founder of Edison Research. “The pandemic period, and all the uncertainties that it’s creating for people is just creating so much stress, so much uncertainty. And in many cases … causing them to lose sleep at night.”

The COVID-19 crisis has led to a major economic upheaval in the country, with the unemployment rate soaring to nearly 15% in April — the worst since the Great Depression. Many Americans have trouble making their rent, which has led to an eviction crisis, while thousands of businesses have shut down entirely.

And amid the pandemic, protests against racism and police brutality have taken place across the country following the police killing of George Floyd, a Black man in Minneapolis, back in May. These calls for justice have prompted some companies to publicly support the Black Lives Matter movement and try to address racial equity within their own organizations.

These major events potentially have huge ramifications for the 2020 election. Here were some of our findings:

What Americans have trouble affording and their fears

Nearly half of all Americans, about 47%, say they would find it at least somewhat difficult to pay for an unexpected $250 expense — an increase from 41% in May 2020.

Black and Hispanic/Latinx respondents are more likely than white respondents to say that such an expense would be difficult to pay.

The poll also found that:

• One-third of Americans have less income now than before the pandemic.

• More Americans are losing sleep over their personal financial situation, with a record high of 35% saying so. It was 32% in our poll this Spring, and 27% in Spring 2019.

• 30% of Americans say they’ve tried to collect unemployment benefits, with half of them telling us they were not successful.

• In the past six months, 18% of renters have missed a payment on their rent, while 64% of Americans are at least “a little” fearful of being unable to pay their rent.

• In the past six months, 14% of mortgage holders have missed a payment on their mortgage, while 48% of Americans are at least “a little” fearful they will miss their mortgage payment.

• More than half of all Americans are fearful of losing their jobs, and just one-third are very confident they would find a new job should they lose their current job.

• 61% of Americans say they are at least “a little” fearful of facing an unexpected medical bill.

• 72% of Americans who have student loans say they are at least “a little” fearful about being unable to make a student loan payment.

The 2020 presidential election and voter attitudes

More than half of Americans, about 55%, disapprove of the way Trump is handling the economy. This level is the highest it’s been in the five polls Marketplace-Edison has conducted during his presidency. Broken down by demographics, 50% of men and 59% of women disapprove, along with 48% of white Americans, 85% of Black Americans and 56% of Hispanic/Latinx Americans.

A majority of Americans, about 64%, say the U.S. economic system is rigged in favor of certain groups. While this sentiment has remained consistent since our poll first asked this question in 2016, there’s been a partisan shift. In 2016, 63% of Clinton supporters said the economy was rigged compared to 57% of Trump voters. But in our latest poll, 86% of Biden supporters say the economy is rigged compared to 33% of Trump voters.

When it comes to other voter issues, the poll found:

• 83% of Americans say they’re worried about COVID-19 at least “a little.” However, Biden supporters are more likely to say that they are “very worried,” at 71% compared to 29% of Trump supporters.

• Three-quarters of Americans say they’re at least “a little” worried about the environment and climate change, although that concern is primarily driven by Biden supporters. 64% of Biden supporters are “very worried” compared to 19% of Trump supporters.

• A majority of Americans (68%) are confident their votes will be counted accurately, with 66% of Trump supporters and 74% of Biden supporters feeling that way.

Two-thirds of Americans, overall, say they think race relations in the U.S. are at least somewhat bad, compared to about 77% of Black respondents.

When it comes to employment and race issues, the poll found:

• Of those who have spoken up at work, almost half of them have done so within the past six months. Broken out by demographics, 44% of white Americans, 41% of Black Americans and 43% of Hispanic/Latinx Americans have done so since April.

The poll found that 1 in 5 workers say they’ve experienced job discrimination based on their race. And a majority of Americans said that the U.S. economic system is rigged in favor of certain groups, with 81% of Black Americans saying so, compared to 61% of white Americans and 65% of Hispanic/Latinx Americans.

Parenting and education during the pandemic

Almost a third of parents with children attending school partially or completely online have had to cut back on work hours to help their child with school. About 63% of women say they’re primarily responsible for helping their kids with online school compared to 29% of men.

The poll also found that when it comes to work and childcare:

• 19% of parents say they’ve quit their jobs or taken a leave of absence to help their children with school.

• 13% of parents say they’re paying for additional help with childcare or tutoring.

• 27% percent of Americans say that their employer has made them feel as if they haven’t been productive enough since the COVID-19 pandemic began. These figures are the highest for younger age brackets, with 35% of those ages 18-34 feeling this way. Meanwhile, about 34% of Hispanic/Latinx respondents feel this way compared to 26% of white workers and 24% of Black workers.

• However, a majority of respondents, about 57%, said that their employer has allowed them more flexibility around their schedules.

The Marketplace-Edison Research Survey is a national survey of Americans 18 and older. A total of 1,647 respondents were interviewed, with 725 interviews conducted by telephone and 922 interviews conducted online. The interviews were conducted from Sept. 25 through Oct. 8, 2020 in both English and Spanish. For purposes of analysis, respondents who identify as Black or Hispanic/Latino were oversampled and then weighted back to their proper proportion of all adults.

Asian-Americans are included and represented in the poll findings, but we did not oversample in a way that would allow us to analyze this group discretely.