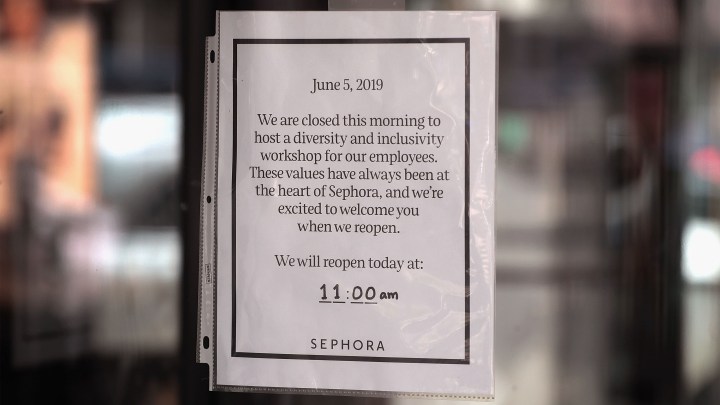 COPY
Sephora closed its stores in 2019 to hold diversity and inclusion training for its employees. Following weeks of protests against police brutality, companies have made a renewed commitment to tackling systemic racism. Scott Olson/Getty Images
Race and Economy

Sephora closed its stores in 2019 to hold diversity and inclusion training for its employees. Following weeks of protests against police brutality, companies have made a renewed commitment to tackling systemic racism. Scott Olson/Getty Images
Listen Now

Major companies, including Apple, Estée Lauder and NBCUniversal made public commitments this week to improve racial equity in their organizations amid a national reckoning over systemic racial injustice. Most large companies already have diversity and inclusion programs, many of them decades old, replete with bias-awareness trainings, listening sessions and working groups.

But these initiatives often fall short of their stated goals and sometimes even make matters worse.

In her decades of work in banking and finance, Debra Gore-Mann has sat through her fair share of racial sensitivity workshops. As a Black woman, she’s often asked to share her experience of racism in the workplace.

“And I’m not going to sit in the room and say, ‘Well, you know, Charlie said this and that,’ and then I’ve got to go back to work, you know?” she said. “So I’m watching every word because you could just cut the tension.”

She’s now the president of the nonprofit Greenlining Institute, which advocates for more diversity in staffs and better inclusion practices to foster an environment where diversity thrives.

Such programs are often hampered, she said, by concerns about making everyone comfortable, which lead to sanitizing the issue.

“The discussion around white privilege and white fragility is too uncomfortable to have,” she said. “So they focus on how to make the workplace more comfortable for people of color, and you’re not really dealing with the underlying issue.”

Discussions about race at work also often end up putting the onus of sharing on the people who have already been hurt.

“It’s very traumatizing,” said Brianna McCullough, a program manager at Google who’s worked as an engineer at various other companies. “When you put that on Black people and people of color who are already at war, I think it’s just completely irresponsible.”

She said diversity and inclusion initiatives often mean a lot of extra emotional labor for people of color — being sent to conferences and recruiting events, often with little reward.

“It’s not valuable when it comes down to your review, but they want you to do that legwork and teaching other people how to treat you,” she said.

She hopes the current moment will inspire more white colleagues to take leadership on this work.

But these initiatives have sometimes been shown to make biases worse, said Kira Hudson Banks, a professor of psychology at Saint Louis University and co-principal of The Elephant and the Mouse, a business consultancy that develops custom diversity and inclusion programs.

“There’s going to be people for whom the mere conversation is going to raise their defensiveness,” she said. “It’s going to be perceived as a threat, and that might even further entrench their stereotypes.”

Banks said sustainable change takes time and commitment, and too often such programs are an afterthought, conceived quickly in a moment of crisis.

She recommends training programs last at least nine months to a year. After all, she said, the inequities we’re trying to solve are hundreds of years in the making.