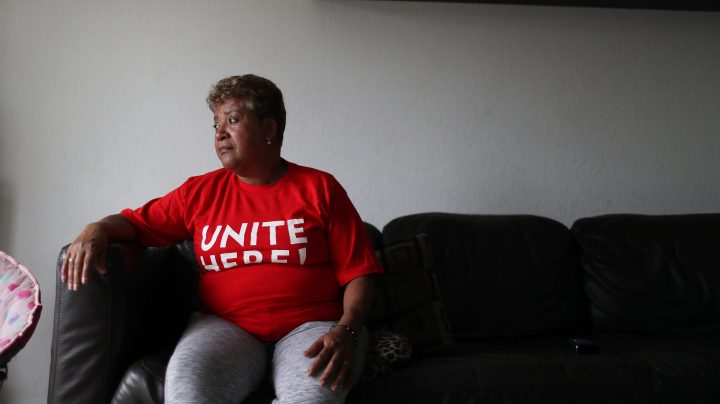 COPY
It's the 30th week in a row that more than 800,000 Americans have filed new applications for unemployment benefits. Joe Raedle/Getty Images
Economic Anxiety Index®

It's the 30th week in a row that more than 800,000 Americans have filed new applications for unemployment benefits. Joe Raedle/Getty Images
Listen Now

Almost 900,000 workers filed for first-time unemployment benefits last week, a small jump from the week before, making it the 30th week in a row that that number has topped 800,000.

That’s the context for the results from our latest Marketplace-Edison Research Poll, which measures how Americans are feeling about their personal finances as well as the broader economic picture.

The SparkNotes version? People don’t feel much better about the economy now than they did in the spring.

One key statistic from today’s data: 47% of Americans would find it either somewhat or very difficult to pay for an unexpected expense of $250 — up from 41% in May. And Black, Hispanic and Latinx respondents are much more likely than white respondents to say such an expense would be difficult to pay.

Another, related statistic from today’s poll: one-third of Americans have less income now than before the pandemic.

“Since the pandemic, we haven’t really had much expendable income,” said Ashley Zentz, a first-grade teacher in Monterey, California.

“Which covers, you know, rent, food, but only barely. There’s not much else,” Zentz said.

“When he had the federal benefits, at least we had a little bit of wiggle room where it was like, if something happened, it wouldn’t be the end of the world right then. But now that that’s gone, that’s also kind of not there anymore.”

All of which translates into a lot more uncertainty about what the future holds.

“You know, you want to be able to maybe put a down payment on a house, or just kind of have that stress lifted off your shoulders when it comes to money,” Zentz said. “But looking forward now, it doesn’t really seem like that’s going to be a possibility for us.”