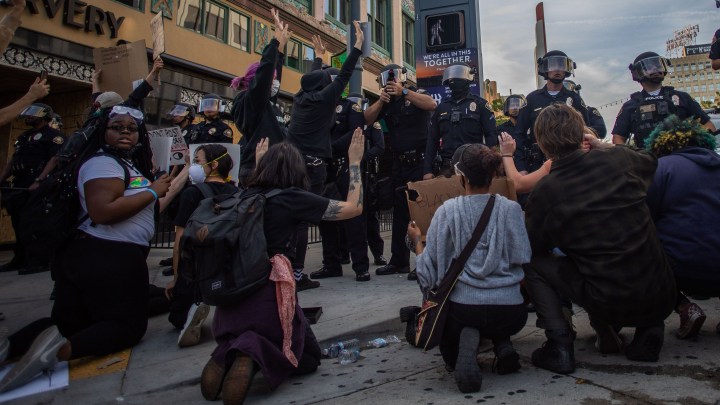 COPY
Marc Morial with the National Urban League says police reform "also means how you deploy your resources, where you put your focus." Apu Gomes/AFP via Getty Images
Race and Economy

Marc Morial with the National Urban League says police reform "also means how you deploy your resources, where you put your focus." Apu Gomes/AFP via Getty Images
Listen Now

There have been protests in nearly 150 cities nationwide amid calls for justice in the police killing of George Floyd, an unarmed Black man in Minneapolis. Some of the protests have involved destruction of property and looting.

Instances of police misconduct, however, come with their own costs: costs to the psyche, costs to community trust and economic costs. It’s not just direct financial costs to municipalities and taxpayers, though. There are long-term, generational economic tolls that come as a consequence of police brutality.

In a 2017 University of Hawaii Law Review article titled “How Much is Police Brutality Costing America?” author Eleanor Lumsden lays out several examples:

Marc Morial, president and CEO of the National Urban League, the civil rights organization, says another “hidden cost” of police misconduct is the money that cities have to pay victims in civil judgments.

“The public knows nothing about it. Many times it’s hidden behind confidentiality agreements, attorney-client privilege. It’s not discussed,” Morial, also the former mayor of New Orleans, said.

“The 10 cities with the largest police departments paid out $248.7 million in 2014 in settlements and court judgments in police-misconduct cases,” The Wall Street Journal reported in 2015.

In just the first eight weeks of 2018, Chicago paid out $20 million in police misconduct lawsuits, according to a local news investigation.

New York City pays by far the most. In 2017, it paid a record $302 million for police misconduct lawsuits, according to the city controller’s office.

Morial spoke with “Marketplace Morning Report” host David Brancaccio about this. The following is an edited transcript of their conversation.

David Brancaccio: Now the anger we’ve been seeing in streets across the country was sparked by the killing of a man by a policeman. It is a murder case, people want justice. Racial divides play a key role in this issue of police brutality nationally, but what do you think about economic divides?

Marc Morial: The economic divide that we face in America underlies many of the other disparities. It underlies health disparities. It underlies housing disparities. It underlies many quality-of-life disparities that exist in America today. The economic divide, the growing income inequality, the widening of the racial wealth gap. What Americans should understand is that we’ve gone backwards when it comes to this notion of the American dream being achievable and attainable for all, and this notion that people that work, if they work, can basically make enough money to make ends meet. And on top of that we’ve had a disinvestment in many of America’s urban communities. You’ll see glittering downtowns, next to deteriorating neighborhoods. And the recession of 2008 to 2011 or so really exacerbated that divided, caused great challenges with respect to housing, great losses of wealth and housing. And those neighborhoods were not reinvested in. They were not, if you will, given a Marshall Plan, or a [Trouble Asset Relief Program], or any other sort of sustainability. And now, to some extent, the bills are coming in, or I might dare say the chickens are coming home to roost.

Brancaccio: Now I saw Keith Ellison quoted the other day, Minnesota’s Attorney General and former congressman, and he says he’s been feeling like the neighborhoods where he goes running have felt on edge, I mean, before the George Floyd killing, because of the mess that was caused by the pandemic, on top of what you’ve just been talking about.

Morial: So it’s a combination of factors. I think Attorney General Ellison is right. Look, the COVID ⁠— you’ve got 40 million plus people out of work. You’ve got a Black unemployment rate at 17%. Latino unemployment rate at 18%. A white unemployment rate at 14%. You’ve gone from Jan. 1 of this year, where we had record levels of employment and record low levels of unemployment. And then now, just not even six months later, we’ve got record unemployment, record job losses, on top of that, police brutality and racial violence has come into focus in a clear and in an ugly way. These cases ⁠— George Floyd, Breonna Taylor, if you will, Ahmaud Arbery ⁠— we have videotapes in two of the three. We’ve got a disturbing 911 call in the third. The evidence has laid bare so much of what we’ve been talking about for years.

Morial: Policing is a component of making a community better or indeed making a community safer. Quality housing is important. Solid, strong infrastructure, good streets, good parks, good playgrounds, good libraries, good schools, good community centers that are, if you will, operational, that that feel good, look good, operate well ⁠— that helps to make a neighborhood. Paved streets, if you will, public plantings and trees ⁠— all of these make neighborhoods and give neighborhoods quality of life. People who have the opportunity to earn a good living when they work hard all day, that makes for a good neighborhood. And we’ve seen this steady but slow deterioration.

Brancaccio: Cities pay out a lot of money in these police brutality cases. New York spent, I think it was like $230 million on police misconduct payouts in 2018 alone. Chicago spends a fortune. Small cities, as well ⁠— I was looking at Long Beach, California, spent $30 million in a recent five-year period. I mean, you ran a city, New Orleans, Mr. Morial. You’d think that the money that cities have to pay victims would incentivize more reform.

Morial: This is an outrage, and this is what I call one of the hidden costs of police misconduct: that cities pay out millions and millions of dollars in civil judgments. The public knows nothing about it. Many times it’s hidden behind confidentiality agreements, attorney-client privilege. It’s not discussed.

You know, I inherited, when I took over as mayor, a number of very, very large lawsuits and, you know, it stretched our ability to execute police reform. And, in some instances, I believe Cleveland is one, they’ve actually issued tax-exempt bonds. They’re paying interest in fees in which they borrowed money to pay off judgments that were as a result of the consent decree that they were under.

Brancaccio: Essentially, you’re talking about police misconduct bonds. In other words, we need to borrow from people to be able to pay this stuff and they route that through Wall Street.

Morial: And they pay fees and they pay interest. And, you know, it’s not like we borrowed money to build a new community center, or borrowed money to build a new library, or borrowed money to improve a school. You have cities out there borrowing money to pay off judgments because of brutal and corrupt police officers. And, look, this has got to stop this. We should have, and we should have as a goal, a nation of constitutional policing. One of the things that that really struck me about the George Floyd case is that you had four officers seeking to apprehend a man for a “violation involving $20.” What kind of use of resources is it for four men, who are probably ⁠— whatever their salaries are, but they’re certainly paid, you know, more than $20 an hour ⁠— four men to spend all that time trying to apprehend, and, if you will, ultimately taking this man’s life, throwing him on the ground and handcuffing him, for what? For what? A $20 bill? Allegedly a $20 bill?