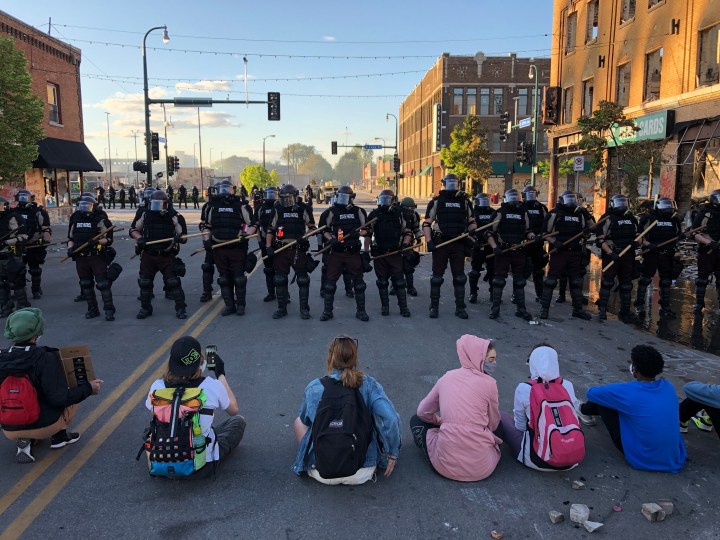 Demonstrators sit in the street before a row of police officers in Minneapolis a few days after the slaying of George Floyd. During the protest movement, many activists suffered physical injury and financial loss. Kerem Yucel/AFP via Getty Images

Demonstrators sit in the street before a row of police officers in Minneapolis a few days after the slaying of George Floyd. During the protest movement, many activists suffered physical injury and financial loss. Kerem Yucel/AFP via Getty Images

While protesting the murder of George Floyd, Soren Stevenson was struck in the face by a police officer’s rubber bullet.

Stevenson, a Minneapolis resident, lost his left eye and has since had multiple facial surgeries for his injury. His medical bills surpass $160,000 — and they continue to climb.

Stevenson took part in a nationwide wave of protests calling for racial justice that followed then-Minneapolis officer Derek Chauvin’s murder of Floyd on May 25, 2020. Chauvin was convicted at trial and is soon to be sentenced.

Police have confronted protesters at these events, sometimes shooting them with rubber bullets or releasing tear gas into the crowds. Many police departments are also equipped with sophisticated arsenals and for decades have received military weaponry like grenade launchers and armored vehicles through the U.S. Defense Department.

On an economic level, police misconduct may lead to cities having to pay out millions of dollars in settlements and court judgments.

Those who were hurt during these altercations suffered not only physical and emotional stress, but many would later face financial and economic consequences: thousands of dollars in medical bills and lost job prospects because of the debilitating nature of their injuries.

Although some of the injured were insured, several protesters and their families set up GoFundMe pages, crowdfunding cash to help pay the bills.

Families Supporting Families Against Police Violence, a support group in Minnesota, has provided emotional and financial aid to people who were injured by police or whose family members were killed in confrontations with law enforcement.

“People are out there trying to fight for the right things and stand up against police brutality,” said the group’s founder, Toshira Garraway, who added that she lost her own child’s father to police violence.

Garraway said the organization has been able to donate thousands of dollars to families in need, which includes help with their medical bills.

To pay his bills, Stevenson has used a mix of money received through Medicaid and crowdfunding. He said he was very fortunate because while he was injured, family members set up a GoFundMe to pay for his bills. He became the beneficiary of that in early July.

His GoFundMe page has raised more than $77,000. He said he’s been able to donate extra money to Families Supporting Families Against Police Violence and to people with injuries similar to his.

Aside from medical bills, Stevenson faced “opportunity costs,” he said, like being unable to apply for jobs for months.

“I couldn’t really look at a [computer] screen — until about late August, September,” he said.

Now, about a year after he was hurt, he’s started working as a real estate development officer at Northcountry Cooperative Foundation, a Minnesota nonprofit that helps residents of manufactured housing communities organize cooperatives.

Nicole Maestas, an associate professor of health care policy at Harvard Medical School, said the economic consequences for people who are injured can be severe. She said many people in the U.S. workforce lack any form of earned sick leave through their employers. Then there’s the question of whether they have health insurance..

“Even if they do have a health insurance plan, chances are their out-of-pocket costs are significant,” she said. “The deductibles associated with plans today are just really, really high.”

The average deductible for individual workers stands at $1,644, according to a 2020 survey by the Kaiser Family Foundation. That’s up from $917 a decade earlier.

Cortez Rice, who calls George Floyd his “uncle,” said he was hit in the ankle by a tear gas canister while protesting the killing of Daunte Wright. In April, Wright was fatally shot by a police officer in Brooklyn Center, Minnesota.

Rice now has to wear a cast, making it difficult for him to move around. He’s a carpenter who’s been unable to work. He said he’s been deprived of about $3,000 in wages as a result.

“I’m not worried about losing my job because I’m in a union. But I have lost a substantial amount of money, that’s for sure,” Rice said.