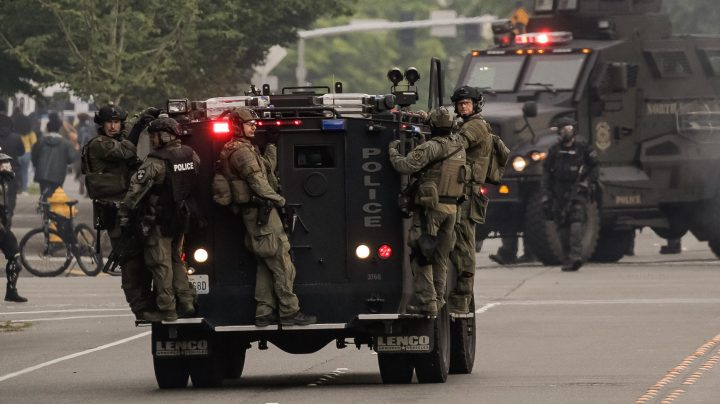 COPY
Amid protests, some want to end the program that sends military gear to local law enforcement agencies. Above, police ride an armored vehicle on May 31 in Bellevue, Washington. David Ryder/Getty Images
Race and Economy

Amid protests, some want to end the program that sends military gear to local law enforcement agencies. Above, police ride an armored vehicle on May 31 in Bellevue, Washington. David Ryder/Getty Images
Listen Now

For decades, police departments have acquired military weaponry like grenade launchers and armored vehicles for little cost through a controversial Defense Department program called 1033. The program has sent over $7 billion worth of excess military equipment to more than 8,000 local law enforcement agencies across the country, according to the office overseeing the program.

As more images emerge of police in riot gear confronting peaceful protesters marching against racism and police brutality, several lawmakers on both sides of the aisle are calling for an end to the program that arms civilian officers with gear typically used in active combat.

The 1033 program was instituted in 1997 under the Clinton administration amid pressure to bolster police forces’ ability to fight the war on drugs. It transfers the military’s extra or outdated gear to state and local authorities who apply for it, who are responsible only for the cost of shipping.

The program was thrown into the spotlight in 2014 due to a militarized police response to Black Lives Matter protests in Ferguson, Missouri, following the police shooting of Michael Brown. The Obama administration responded by placing some restrictions on the types of items that could be transferred to police departments, but these restrictions were lifted by the Trump administration in 2017.

Supporters of 1033 point out that it’s not all weapons — much of the gear transferred is mundane items like office supplies and clothing. But critics say the access to high-powered weapons and tactical vehicles allows local agencies to build outsized police forces and encourages police violence.

“People are seeing for the first time just how militarized the police force is. And this militarization is contributing, potentially, to the higher rates of violence that we’re seeing more ubiquitously in this particular movement that’s happening right now,” Sabrina Karim, a professor of government at Cornell University, told “Marketplace Morning Report” host David Brancaccio.

“I’ll also say that militarized policing is not just specific to the response to protests. But also it’s kind of everyday policing. So you see things like the no-knock raids that killed Breonna Taylor,” she said.

Karim spoke with Brancaccio about how the program has changed how police interact with communities around the country. The following is an edited transcript of their conversation.

David Brancaccio: So the idea is the Pentagon bought this stuff originally for the military, doesn’t need it anymore and can give it to local police departments. And it’s not just flashlights. Some of this is pretty heavy-duty stuff.

Sabrina Karim: That’s right. So we have everything from office equipment, clothing, tools, radios. But then we have some pretty heavy-duty things, things like armored vehicles, assault rifles, grenades and something called a Mine-Resistant Ambush Protected vehicle (MRAP), which was invented by the Department of Defense as a counterinsurgency strategy to be able to fight IED attacks in Iraq and Afghanistan.

Now, this program for the MRAP, as they’re called, was a very expensive program in the billions that cost about $800,000 per vehicle. And so there were an excess of these as the military developed more efficient vehicles. And so, what do you do with the excess MRAPs that were built? Well, one solution was to transfer about 600 of these to local law enforcement agencies through this program.

Brancaccio: And those vehicles were not seen as an unqualified success when originally deployed by the military. I mean, first of all, they were fuel hogs, I remember.

Karim:  Yes, so they’re inefficient in terms of fuel, as well as inefficient in their counterinsurgency purpose, because they’re big vehicles that basically prevent soldiers from being able to interact with the community. And so if it was ineffective in counterinsurgency, I’m not quite sure that they would be effective in local law enforcement when the job of the police is to be able to engage with the community.

Brancaccio: What does the police department pay? Shipping, right?

Karim: That’s right. It’s a transfer, so that means that the agencies don’t have to pay for this equipment. So because the government has already possessed it, paid for it, it’s the Department of Defense’s property. So this is a way for them to transfer excess material, excess equipment, excess vehicles that are outdated, maybe they procured too much of it — on to local and state authorities. Studies have shown that, on average, a county receives about $58,000 per year of equipment, and an agency on average can receive about $48,000 of equipment.

Brancaccio: And even school districts can be eligible for this military surplus?

Karim: They can be, yes. You just have to be a law enforcement agency. And basically, that means that school police officers as well as college campus police officers, as well as even state park officers are eligible to receive some of this equipment.

“It’s a transfer, so that means that the agencies don’t have to pay for this equipment. So because the government has already possessed it, paid for it, it’s the Department of Defense’s property.”

Brancaccio: Among your concerns is if you have fancy equipment from the military, it sort of begs some kind of use, and you think that can be fraught.

Karim: Yes. So you can think of this as a present from the government. So if you receive a present at Christmas time, a new toy, you want to be able to use it. Well, this is kind of the same thing for a number of law enforcement agencies. Because, if you have this gear, then you’re dressing up almost in combat fatigue and coming in in these armored vehicles. You’re not a police officer anymore, you’re a soldier, and you adopt that mentality.

Brancaccio: And at this moment in U.S. history, you’re seeing more calls to reevaluate this whole program?

Karim: We are. We have two things going on here. We have very broad participation, there’s more news coverage, and so people are seeing for the first time just how militarized the police force is. And this militarization is contributing, potentially, to the higher rates of violence that we’re seeing more ubiquitously in this particular movement that’s happening right now. I’ll also say that militarized policing is not just specific to the response to protests, but also it’s kind of everyday policing. So you see things like the no-knock raids that killed Breonna Taylor. And I think that the 1033 program is an enabler, but not necessarily the direct cause.