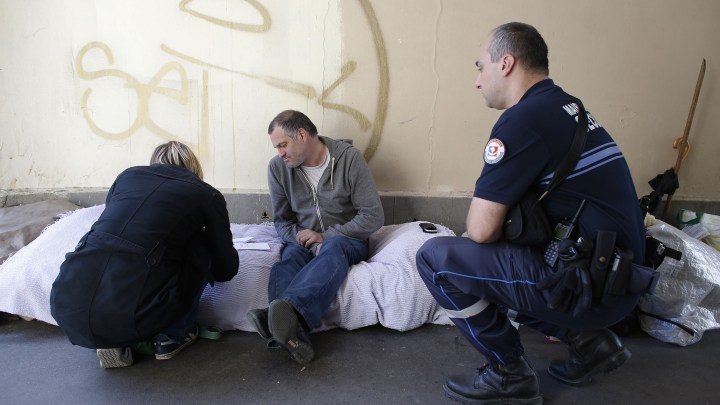 COPY
A social worker and member of the Prevention and Protection service help a homeless man in Paris in 2014. Thomas Samson/AFP via Getty Images

A social worker and member of the Prevention and Protection service help a homeless man in Paris in 2014. Thomas Samson/AFP via Getty Images
Listen Now

In the wake of the killing of George Floyd, calls have grown louder across the United States for city leaders to rethink how their police systems operate and the ways they’re funded.

Proposals for reforming or reimagining the system vary, but one idea has quickly gathered momentum: more formal public-partner partnerships between community members and law enforcement officers to foster greater trust. The thrust in parts of Europe is formal community participation guiding the way law enforcement is carried out.

The Organization for Security and Cooperation in Europe has done quite a bit of research on this, and it’s found the basic principles of this model are making officers more visible and accessible to the public, listening and responding to community needs, engaging with people and being accountable for their actions and outcomes.

To do that, the organization recommends introducing more proactive strategies that involve not only police officers, but also members of the community and community service organizations that do work that intersects with policing — things like education, mental health and youth services. The OSCE also recommends reorienting police patrols so officers more often respond in person to non-emergencies like disputes between neighbors or petty theft.

Elizabeth Aston, the director of the Scottish Institute for Policing Research, explained community policing has been successful in places like Scotland, where there’s a long history of public-police partnership, and also in Helsinki, Finland, where police have worked for a while to establish a relationship with city organizations and community members on problem solving and crime prevention at shopping areas.

Aston emphasized this work needs to include more than just police.

“A lot of preventative work should be done across departments,” she told the BBC’s Victoria Craig. “Unfortuantely, when a lot of other social services are defunded, that reduces the ability of other state organizations to operate in this preventative, collaborative space.”

It is not as easy as just copying and pasting the funding model from one city or country to another, though. To implement these concepts in the right way, cities have to consider social, political and historical context ⁠— and the impacts political situations have had on social divisions in different cities.

The whole idea of community policing is to engage everyone and encourage them to shape their own community problem-solving strategies.

The following is an edited transcript of Craig’s conversation with Aston on the “Marketplace Morning Report.”

Elizabeth Aston: It’s about being available, being accessible and focusing on engagement activities rather than enforcement-based activities that can really bring about trust.

Victoria Craig: What is the funding model for a system like this? Does it require more community investment? Or is it more reallocating funds from traditional policing practices and training?

Aston: You know, it varies. Usually community policing will be funded from within police budgets. Sometimes there’ll be local authority input into supporting some officers. But it provides an opportunity, also, for members of the public and other organizations intersecting with policing to be part of the solution to the problems. It really shouldn’t take away from other budgets. I think that’s important. This should be about calling for greater funding for a range of services — mental health, youth services, education, housing, Social Security — rather than necessarily prioritizing policing, because all of these organizations (and the well-being of communities and state organizations more broadly) is very important in providing solutions that are essentially social and not just a problem for the police.

Craig: One of the big topics of debate in the U.S. right now is the share of city budgets that police departments are using. Police budgets in places like New York and London often include investment not just in emergency response, but also in things like counterterrorism and cybersecurity operations. So when we think about reallocating or using the funding in a different way, how do those operations fit into the funding model for areas that are larger versus smaller ones?

Aston: Sometimes what people will prioritize in a local area focuses on things that they can really see in their immediate environment. But you still need to resource cybercrime operations and, as you say, counterterrorism. But the solution to all of these social problems should be wider than just the police, and actually a lot of preventive of work should be done across departments. Unfortunately, when other social services are defunded, then that reduces the ability of other state organizations to be operating in this preventative collaborative space.

Craig: Are there large cities where community policing has really taken hold in a successful way?

Aston: What we saw in some of the countries we looked at in Europe is that community policing often isn’t working very well where there’s been autocratic governments in place before. It needs to be much more democratic and involves communities and shaping what goes on in their area, what their priorities are. In Scotland, there’s quite a long history of engagement and community policing, and local policing does tend to work quite well. In Finland, we found good community policing practices in Helsinki, where police are working very strongly with the city and other organizations around problem solving in areas like shopping centers, for example, where organizations are working together in a preventative way. This took a lot of long-term working and really understanding each other’s priorities, and having [nongovernmental organizations] and groups representing minorities very much at the center of discussions and decision-making processes.