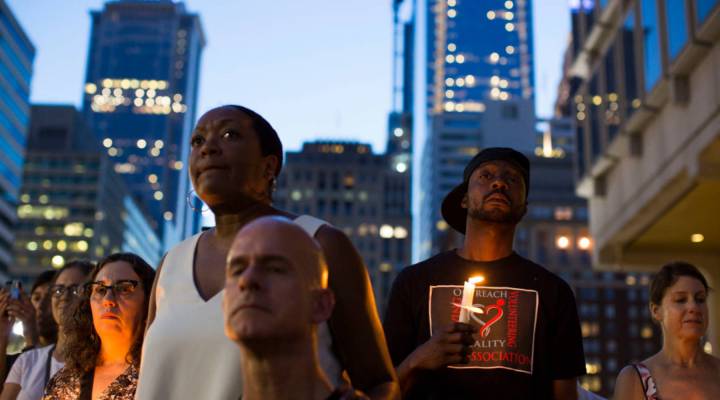 COPY
A vigil is held in downtown Philadelphia on Sunday in support of the victims of violence at the "Unite the Right" rally In Charlottesville, Virginia this weekend.  Jessica Kourkounis/Getty Images

A vigil is held in downtown Philadelphia on Sunday in support of the victims of violence at the "Unite the Right" rally In Charlottesville, Virginia this weekend.  Jessica Kourkounis/Getty Images
Listen Now

The conversation is continuing into this week over what happened in Charlottesville, Virginia. There are now questions about the future of one set of federal programs established under the Obama administration to target homegrown extremism called Countering Violent Extremism (CVE).

The idea of spending government money on trying to thwart terrorist plots has been a focus since the Sept. 11 attacks and was formalized in 2015 under the Department of Homeland Security. The programs under the CVE were given a $10 million budget. The idea was to use these funds to provide grants to help community organizations, city and county law enforcement and other groups whose mission was to prevent any terrorist activity in the U.S.

Both sides of the political aisle have raised concerns about the program. Some on the left argue the FBI and other federal law enforcement agencies have been granted too much access to private information. Some Republicans don’t think the approach focuses enough on involving law enforcement.

The Department of Homeland Security issued a revised list in June for which organizations were granted funding. There are 11 organizations that had been designated recipients of CVE grants from the Obama administration that will now have to go without, under President Trump.

The group Life After Hate would have received $400,000 under the Obama administration to expand its outreach and intervention services for former white supremacists, but that funding has been scrapped.

George Selim, the first head of the Countering Violent Extremism Task Force, resigned on July 28, so there are some lingering questions about the future of the CVE programs going forward.