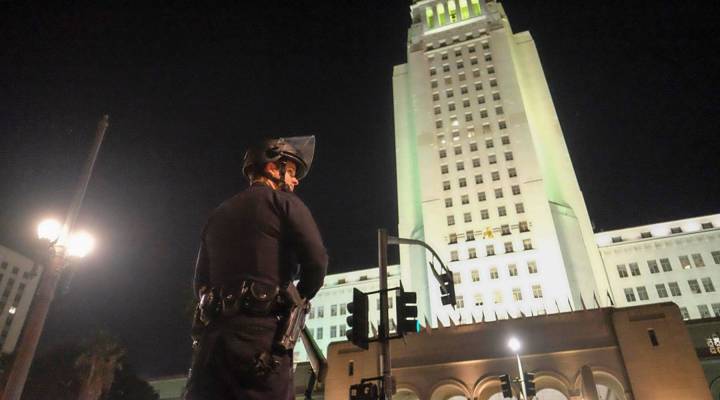 The program, known as the 1033 Program, was originally launched in the 1990s to provide state and federal law enforcement officers with more firepower to deal with heavily armed drug dealers and terrorists. It eventually allowed any police department to obtain a wide range of sophisticated military equipment.

Lou Reiter, a former deputy chief of the Los Angeles Police Department who now consults with police departments nationwide, said it has been “a good program” overall.

“They offered equipment that many police departments could reasonably use,” Reiter said, including night-vision goggles, riot gear, and high-powered weapons.

But after military-equipped police were seen deployed in the streets of Ferguson, Missouri, in 2015, the Obama Administration initiated a review of the range of military equipment local departments were receiving, and how they were deploying it in civilian policing. Ultimately, the Administration banned transfers of some high-powered military equipment (such as grenade launchers and tracked armored vehicles) and required local police to track and monitor the use of equipment that was still permitted to them.

Charles Wilson, chair of the National Association of Black Law Enforcement Officers, said that was the right move to help demilitarize local policing.

Janai Nelson, Associate Director-Counsel of the NAACP Legal Defense and Educational Fund, decried the Trump Administration’s reversal of Obama-era restrictions on military gear, saying it was likely to exacerbate tensions, and increase distrust of police by local residents in many communities.

Robert Kane, chair of criminology at Drexel University, said that with the exception of a few big-city police departments, such as New York and Los Angeles, most departments in the U.S. don’t face severe-enough crime or threats to public order sufficient to require sophisticated military gear like armored personnel carriers and night-vision goggles.

But Kane said that once departments obtain such equipment at little or no cost through the 1033 Program, “they begin to integrate these big military assets into their daily patrol functions.” He said that this ultimately increases distrust of law enforcement in highly-policed urban communities, making both residents and police less safe.

And he said that with city budgets for law enforcement almost always tight, police chiefs will hardly ever turn down a giveaway of military gear for their officers.