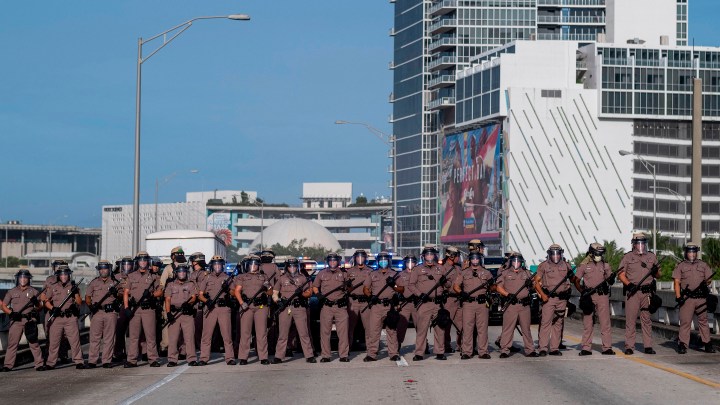 COPY
The participation of law enforcement agencies in this program, to track when officers use lethal force or seriously injure someone, is voluntary. Ricardo Arduengo/AFP via Getty Images
Race and Economy

The participation of law enforcement agencies in this program, to track when officers use lethal force or seriously injure someone, is voluntary. Ricardo Arduengo/AFP via Getty Images
Listen Now

Fewer than half of law enforcement officers nationwide are submitting information to a database designed to track when they use lethal force or seriously injure someone. While more than 6,700 state, local and trial agencies contribute to the National Use-of-Force Data Collection, the FBI said, as of May 29, that covers just over 40% of the “nation’s sworn law enforcement officers.”

The database is relatively new, formed in the wake of multiple high-profile police killings of mostly Black civilians. It began accepting submissions from law enforcement agencies nationwide Jan. 1, 2019, specifically focusing on incidents in which an officer either kills someone, causes “serious bodily injury connected to the use of force” or “discharges a firearm at or in the direction of a person.” But participation in the program by law enforcement agencies is voluntary.

When the program was launched, the FBI said the information in the database would be released to the public at least twice a year. An FBI spokesperson said the first release of the data is coming this summer and will be published in the agency’s Crime Data Explorer.

Nationwide data on use of force by law enforcement agencies has been difficult to track and collect, with information spread across various databases and not always in the same format.

“There are some departments that are still working on pen and paper,” said Ed Chung, vice president for Criminal Justice Reform at the Center for American Progress.

Many of the more comprehensive lists come from news organizations like The Washington Post. And local news outlets, many of which have shut down or reduced staffing, particularly during the COVID-19 pandemic, have traditionally played a role in tracking the deaths.

Frank Edwards, an assistant professor at the Rutgers School of Criminal Justice, said even the incomplete data is a step forward.

“I suspect the numbers from the data when ultimately released will still not be completely comprehensive for the full population of police agencies,” he said in an email, “but we are likely to still need to rely on unofficial data (media-based data collections) or public health data (medical examiner reports) for more complete counts of fatalities.”

Data collection like this falls to the local law enforcement agency, which translates into staff hours and costs for those departments.

“It takes significant amount of funding not only for personnel time to input and collect this information, but for states, localities, departments and agencies to upgrade their systems to make sure that they have technological capability in order to input this,” Chung said.

“The burden hours per incident are estimated to be 0.63 of an hour for completion, around 38 minutes per incident.”

The federal government keeps track of this data collection task by calculating the “burden hours” they are asking of law enforcement. In the case of the National Use-of Force Data Collection, the FBI determined it takes about 38 minutes per incident and up to about 30,000 hours a year for all incidents nationwide.

These numbers were included in a recent regulatory filing by the FBI, which also requested public comment on the extension of the program. Specifically, the agency asked for comments about whether the estimate of “demand hours” is realistic for local agencies, and whether the FBI should be collecting this information at all. Public comments close on July 6.